New research is enabling even more versatility by allowing drones to change their shape mid-flight. Doing so enables them, for example, to slip through gaps to reach areas inaccessible to conventional drones. 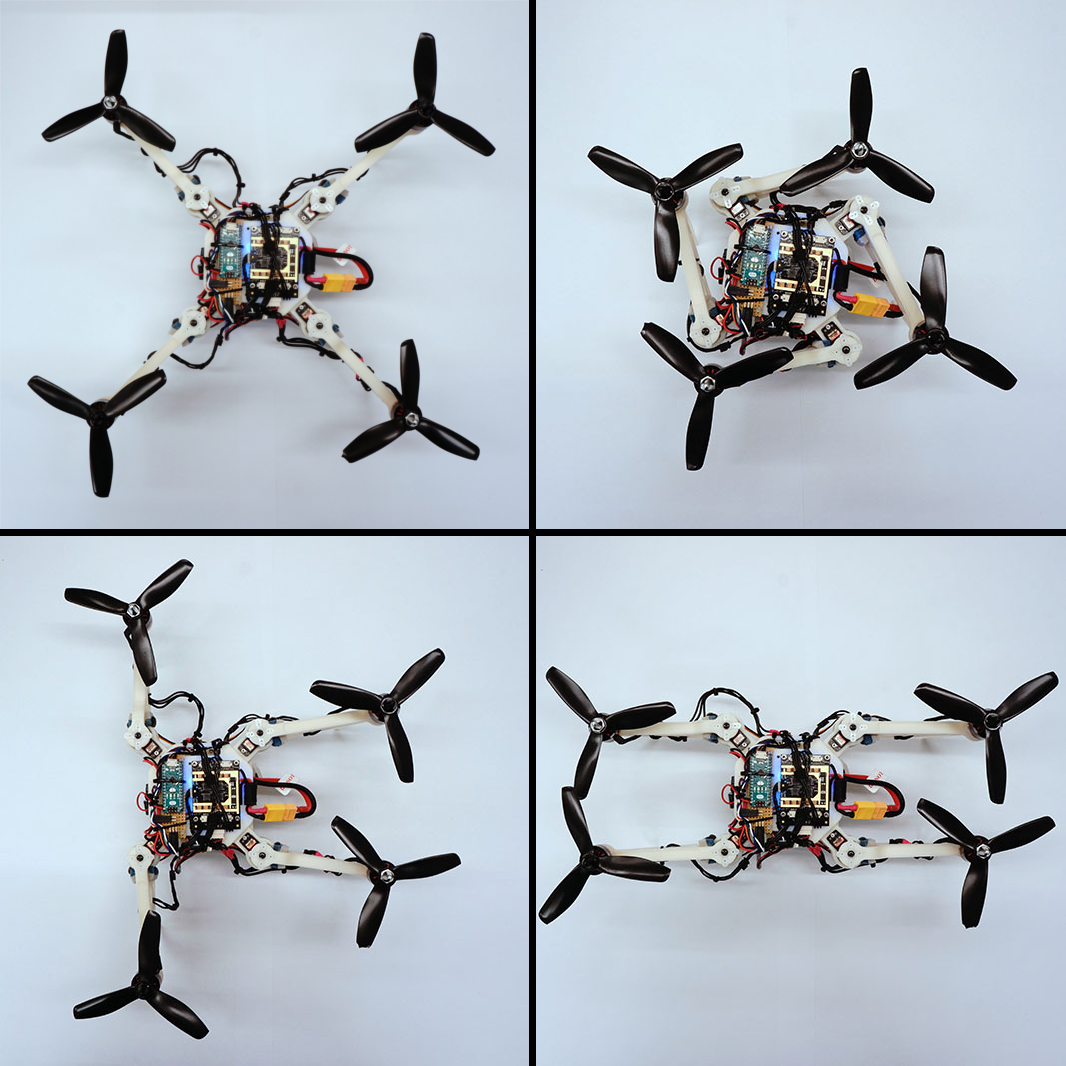 The Foldable Drone’s four arms can independently bend toward or away from the drone’s center, allowing the vehicle to assume a variety of shapes. The H configuration (bottom right) enables the drone to fit through narrow vertical gaps, while the T configuration (bottom left) allows the drone to maneuver its camera near a target for close-up inspection. Source: University of Zurich

The mechanics underlying the shape changes might seem simple at first glance, with only a few moving joints per drone. But it’s no easy task to accomplish these morphing maneuvers without crashing.

Even for an aircraft of fixed form, achieving stable flight requires a sophisticated understanding of aerodynamics and flight dynamics. When the shape of the airframe itself changes, an extra layer of complexity is added into the equation.

That's because a morphing airframe alters the vehicle’s center of gravity as well as the moments (torques) exerted by its thrusters. As a result, the control system needed to maintain a morphing drone's stability must take into account a number of additional parameters compared to an aircraft with a fixed configuration.

Prior to investigating the complexities involved in controlling a morphing drone, however, it is helpful to understand the more straightforward mechanics of a conventional, fixed, rigid-body quadrotor – a drone design that has been used as a base for shape changing capabilities.

Quadrotors are helicopters with four propellers, or rotors. In a conventional quadrotor, the rotors are arranged equidistant from each other in a cross configuration. To balance the system's rotational torque, each of a pair of opposing rotors rotates clockwise, while the other pair rotates counter-clockwise. To hover in place or change altitude, all four rotors spin at the same speed. To move forward, backward, or side-to-side, the quadrotor tilts by altering its rotors' rotational speeds.

For example, to roll about the x-axis, the quadrotor would alter the rotational speeds of the two rotors positioned along the y-axis, generating a differential thrust between the two. In this way, a quadrotor can pitch, roll and yaw to achieve freedom of motion in three dimensions. 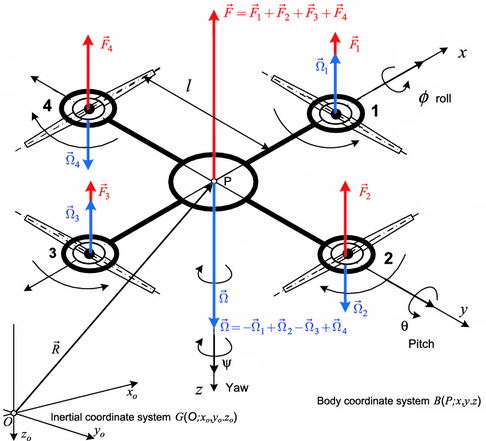 A quadrotor adjusts the angular velocities (Ωi) of its four rotors to produce varying thrusts (Fi) and torques to pitch, roll or yaw in the desired direction. The vehicle’s orientation is described by tracking the rotation of a body coordinate system fixed to the drone relative to an inertial coordinate system fixed to Earth. Source: Springer, Cham

Thus, the goal of a quadrotor control scheme is to find the individual speeds of rotation of the four rotors to generate the thrust needed to carry out these maneuvers while maintaining flight stability.

To calculate these individual speeds, the three-dimensional rigid-body dynamics of the vehicle must be modeled. The first step involves identifying reference coordinates in which the vehicle’s motion can be accurately described.

Two frames of reference are defined: an inertial frame anchored to Earth and a body frame fixed to the quadrotor. So-called Euler angles can be used to describe the relative orientations between these two frames.

With the frames of reference and rotational transformations between the two established, the Newton and Euler equations for the total force and total torque acting on the quadrotor can be combined to produce a model that describes the system's complete dynamics.

To this model are added the forces and moments affecting the quadrotor, which consist of a wide range of physical phenomena. These include aerodynamic, inertial, gravitational and gyroscopic effects.

All of these forces and moments are combined with the Newton-Euler equations to form a complete model of the quadrotor’s dynamics. This physical model serves as the foundation for a control scheme that ultimately computes the individual rotor speeds to produce the desired quadrotor motion.

The most common quadrotor control scheme uses a hierarchical multi-loop architecture with two separate loops for position and attitude control, each informed by a trajectory planner.

[Discover motor controllers and learn more about them on Engineering360.]

In modeling a conventional quadrotor, a number of assumptions are made to simplify the problem. These include the assumption of a fixed, rigid-body, symmetric-rotor configuration, and coincident locations for the vehicle’s unchanging center of gravity and the fixed body frame’s origin. As a result, the equations of motion for a traditional quadrotor are relatively straightforward.

For a quadrotor with morphing abilities, however, these assumptions are invalid. As the structure of the quadrotor changes, the vehicle’s center of gravity shifts, its inertial properties are altered, and the forces and torques generated by the rotors act on the drone in varying locations.

To illustrate the additional complexities inherent in a morphing quadrotor’s physical model and control scheme, consider the case of the Foldable Drone. The arms of this quadrotor can be folded independently to different angles with respect to the body. This means the drone’s center of gravity varies with respect to its geometric center.

What's more, the inertia tensor of the system — comprised of the inertia tensors of the drone’s rotors, motors, arms and body — rotates as the arms fold in and out toward and away from the body. This means the center of gravity and inertial tensor terms in the model must account for the morphology changes.

The Foldable Drone traverses a horizontal gap in two seconds, starting in an X configuration above the gap and folding its arms to assume an O configuration to pass through the opening. Source: IEEE Robotics and Automation Letters

Once these terms are derived and incorporated into the full physical model of quadrotor dynamics, an updated control scheme can be developed that takes into account shape-changing effects. Recalling the common control scheme for a conventional quadrotor, the two standard loops are a high-level position control loop and a low-level attitude control loop. The position control loop does not need to be altered for the Foldable Drone from the scheme used for a conventional quadrotor. This is because the vehicle’s rotors are limited to producing thrust in a fixed direction due to their inability to rotate around any axis other than the z-axis of the body. (Other morphing drones, like DRAGON, are capable of gimbaling their thrusters in multiple directions, requiring more complex modeling and control schemes.)

The attitude control loop for the Foldable Drone, however, must be altered from the traditional scheme to adjust to a changing morphology that alters the drone’s rotational dynamics. To achieve this, researchers devised a continuous-time, infinite-horizon linear-quadratic regulator (LQR) control law. They also executed real-time updates to the dynamic model, linearization and LQR gains to adapt to the drone’s shape changes and guarantee stability in all configurations. The desired torques and, thus, the required thrust per rotor are calculated as the cross product between each rotor’s thrust vector and the length between that rotor and the center of gravity.

Looking to the future

The field of shape-changing drones is at an early stage, with active experimentation, research and development underway. As control algorithms, hardware advances and design philosophies progress, morphing drones will gain increasing versatility and capability. In the future, shape-changing flying vehicles may become more widespread than their fixed-form ancestors, bending and twisting their way to aerial supremacy.

The Foldable Drone: A Morphing Quadrotor that can Squeeze and Fly | IEEE Robotics and Automation Letters 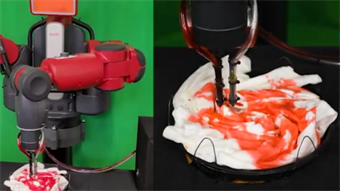 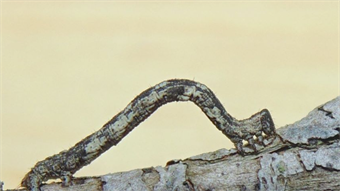