In recent years, unmanned aerial vehicles (UAVs), or drones, have risen in popularity, proving their usefulness in everything from bridge inspections and construction surveys to agricultural monitoring and real-estate photography. So far, however, drone applications have mostly been outdoors where there is plenty of room for flying craft to maneuver.

The next frontier for the vehicles could be indoors, for example, to carry out surveys inside caves or search and rescue operations in collapsed buildings. Motion in these confined spaces often involves traveling through small cracks or gaps, a task that is difficult or impossible for a conventional drone with a fixed size and configuration.

To address this challenge, researchers are taking inspiration from nature. Birds can navigate around obstacles and through small openings by morphing their shape, folding up or tucking in their wings. Scientists are investigating how to best mimic these capabilities in drones to enable them to slip into areas they would otherwise be unable to enter.

Check out the four examples below for a sampling of the latest research into shape-changing aerial drones. 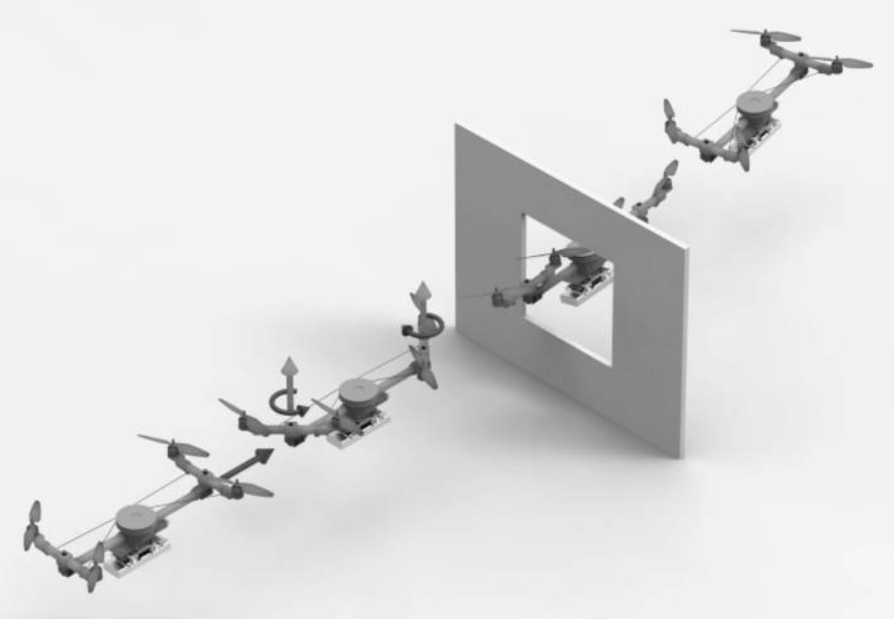 The “quad-morphing” robot, developed by researchers at Aix-Marseille Université in France, is a quadrotor drone with four propellers. One propeller is fixed to each end of two opposing bars, and each of these propeller arms is attached to a central bar.

Wires fixed to each end of the propeller arms wrap around a pulley in the center of the drone. The pulley, mounted on a servomotor, rotates to rapidly change the angle of the propeller arms. It can pull them in to align with the axis of the central bar or force them out so that the arms are perpendicular to the bar and the propellers are spread wide.

With the arms pulled in, the robot can easily slip through narrow gaps, although it loses lift as the propellers overlap the central bar. Once clear of the obstacle, the arms swing back out to stabilize the drone. 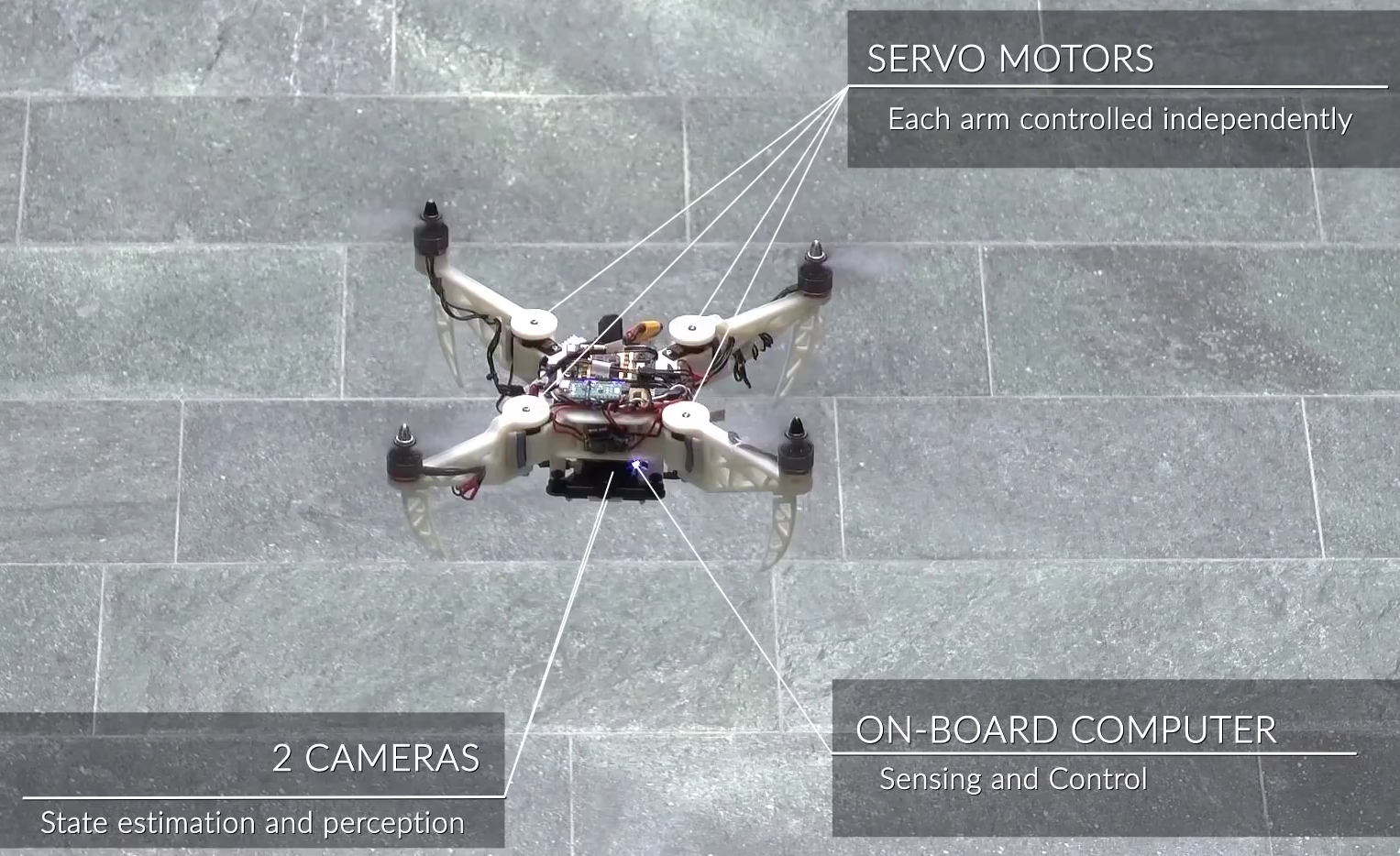 Researchers from the University of Zurich and Ecole Polytechnique Federale de Lausanne in Switzerland devised a more flexible version of a quadrotor drone. The Foldable Drone’s four propellers are each mounted at the ends of four arms extending from a central body that houses a battery, sensing and control systems.

Each arm can fold inward toward the body independently, allowing the drone to assume various shapes. A narrow H configuration allows the drone to fit through vertical gaps, while a T configuration enables it to approach vertical surfaces for close-up inspection. The drone is at its smallest size in the fully folded O configuration. When folded up like this, the vehicle can fit through tight openings but loses efficiency and maneuverability. Returning to the default expanded X configuration, the drone maximizes flight time and agility.

The drone can also grasp and carry objects by folding into an H configuration in which two arms act as a clamp to grip objects.

Study link: The foldable drone: A morphing quadrotor that can squeeze and fly 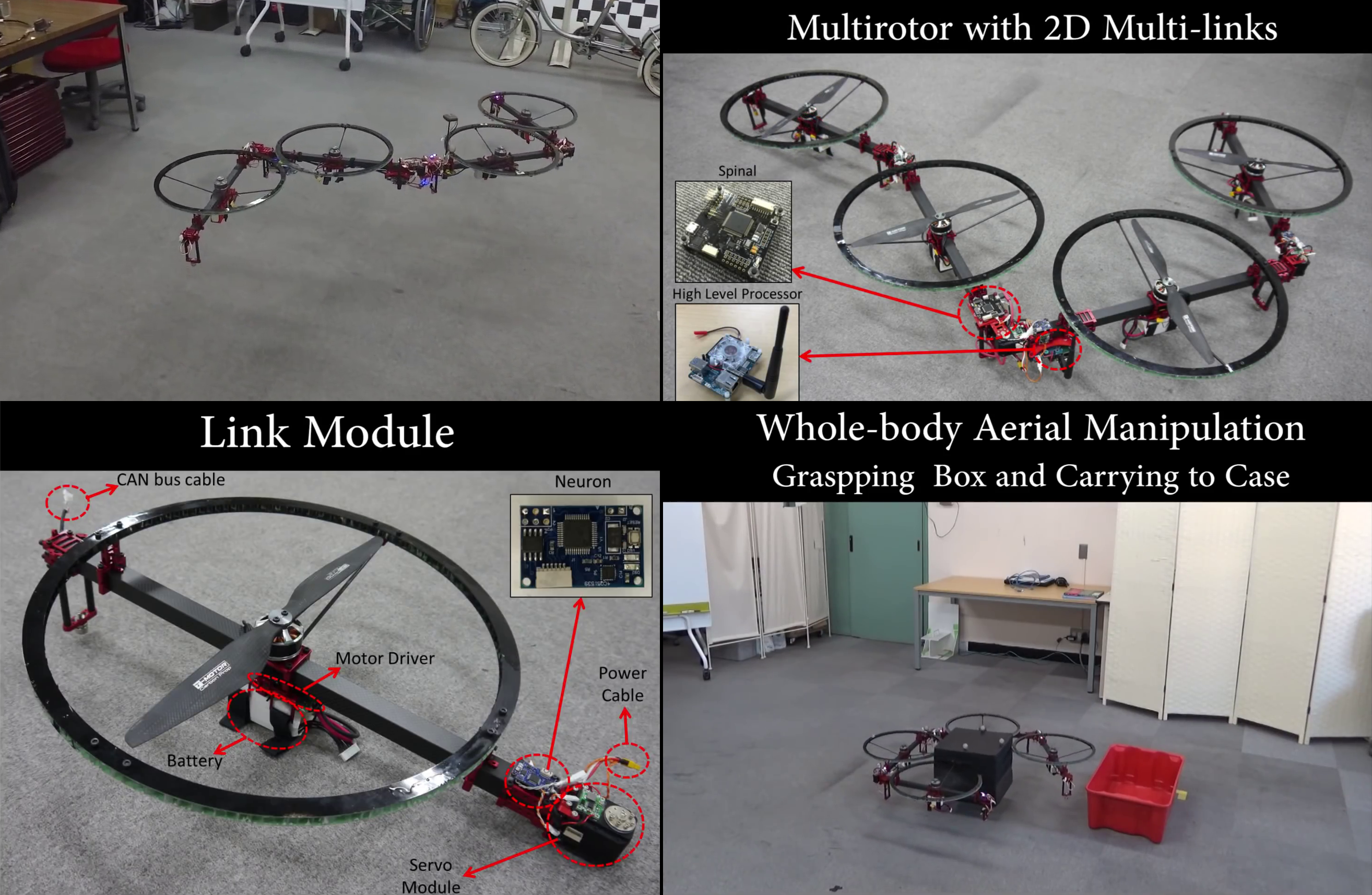 Similar to the previous two quadrotors, a drone developed by University of Tokyo researchers has four propellers. But this snake-like robot’s design is very different. Each propeller is attached to one of four links arranged in a linear series.

Hinges at each joint where the links meet enable rotation in two dimensions. Extended to its full length, the links form a straight line of flying propellers. The drone can bend at each joint to fold up into various shapes, from a squiggly line to a perfect square. The robot can use this capability to manipulate objects by wrapping its body around them to grasp, pick up, carry and drop them at different locations.

The last drone on the list, DRAGON (short for Dual-Rotor embedded multilink robot with the Ability of multi-deGree-of-freedom aerial transformatiON), was also created by University of Tokyo researchers. But it has an even more ambitious and unconventional design. Like the previous drone, its snake-like structure is comprised of four links. Its transformational abilities, however, surpass those of other drones thanks to hinged joints between links that allow servomotor-powered actuation in both the x-y and x-z planes, as well as gimbaled thrusters that can be adjusted in both roll and pitch. A dual-rotor gimbal module carrying two ducted fan thrusters is attached to the center of each link, for a total of eight thrusters providing finely-controlled directional propulsion.

[Discover servomotors and learn more about them on Engineering360.] 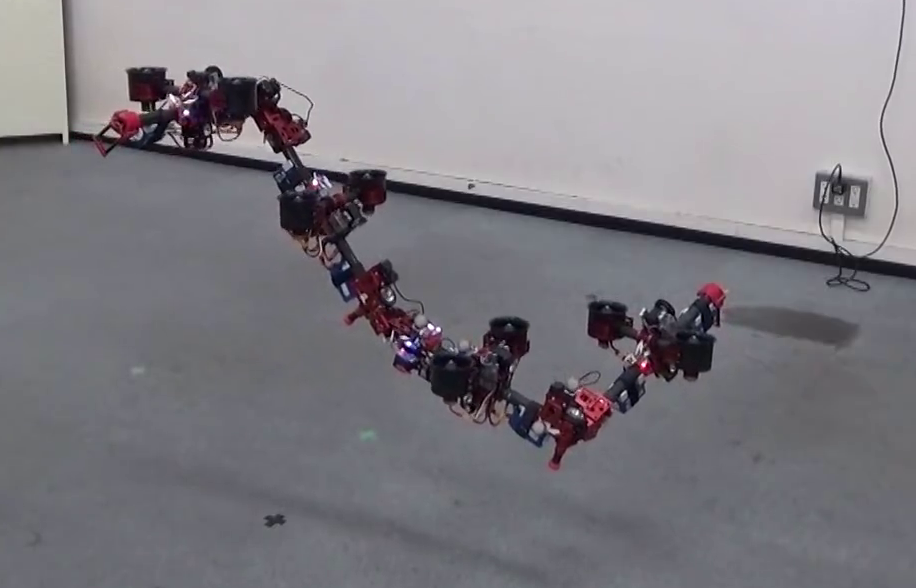 With its unprecedented aerial transformation capabilities, DRAGON can assume a wide range of shapes, from simple straight lines and squares to three-dimensional spirals. Furthermore, the drone has surprising aerial maneuverability. In one experiment, the robot traverses a horizontal gap, beginning the maneuver hovering in a coiled position below the opening and unfolding into a snaking helix as it moves upward through the gap.

Study link: Design, modeling, and control of an aerial robot DRAGON: A dual-rotor-embedded multilink robot with the ability of multi-degree-of-freedom aerial transformation

Maintaining stable flight for these morphing drones is no easy task. Keeping a shape-changing drone aloft requires a sophisticated control system to govern the morphing process while accounting for shifting flight dynamics. Learn how these control systems work.