Multirotor drones, such as quadcopters, are dominating consumer VTOL (vertical take-off and landing) UAV (unmanned air vehicles) markets thanks to their ease of use and adaptability. When designing multirotor drones, aerodynamic interactions are important to consider. The size, shape and weight of the drone along with various characteristics of the drone’s propellers affect the drone’s flight characteristics. 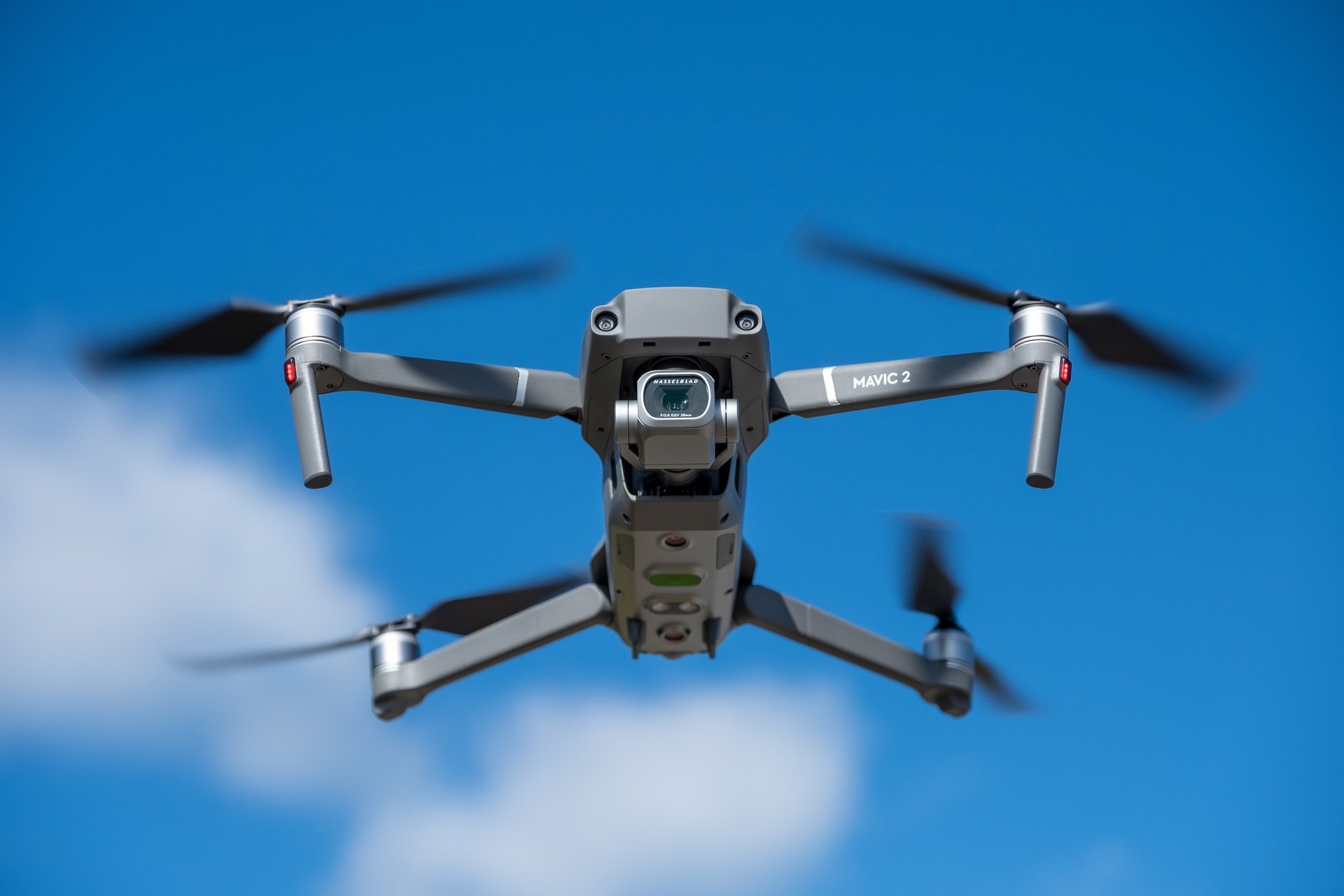 Figure 1. Quadcopter in flight.The main selling feature of multirotor drones is that they can take off and land vertically, meaning they can operate in tight spaces. Unfortunately, multirotor drones tend to consume a lot of power and have short flight times and ranges.

The forces differ due to fluid flow across the aircraft and how thrust is generated. Fixed wing drones tend to have one propeller and are designed more similarly to traditional aircraft.

The motor of a multirotor drone is responsible for generating thrust. To achieve flight, the motors should produce around 50% more thrust than the weight of the UAV. This will help the drone fly in windy conditions and make steep turns.

There are two types of motors to choose from, brushed and brushless. Brushless motors offer more power and are suitable for heavier and larger drones.

The role of propellers 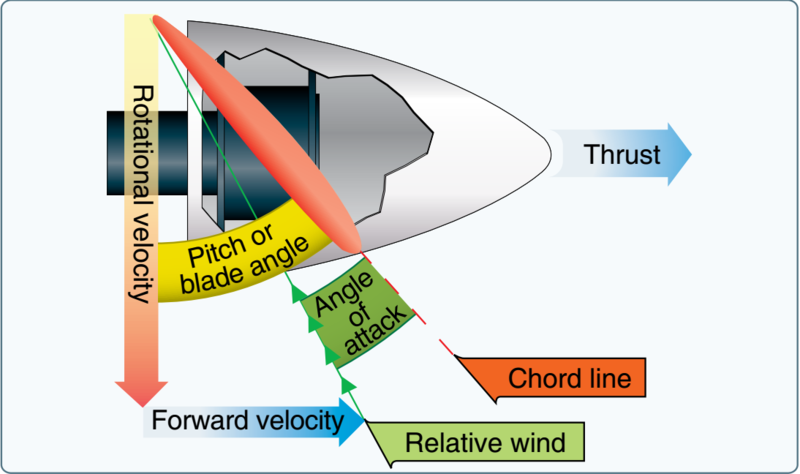 Propeller efficiency is based on the angle of attack. Efficiency is calculated as a ratio of the output and input power, with well-designed propellers having an efficiency of 80 percent. 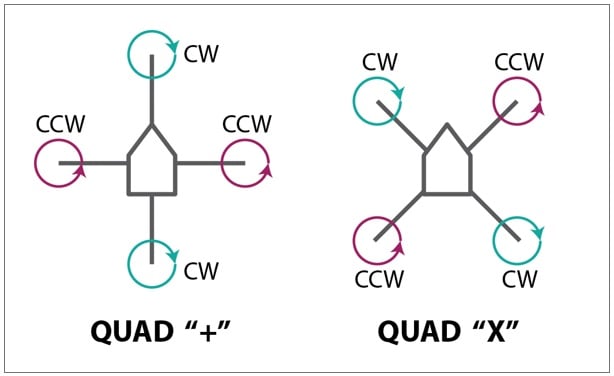 Figure 3. Quadcopter propeller direction for “+” and “X” configurations.The thrust generated by a propeller is directly related to the rotational speeds (revolutions per minute), air density, rotor diameter, shape, and rotor area, as well as its pitch.

A multi-rotor drone is an unmanned aircraft (UAV) that consists of multiple propellers that rotate around a central mast. There is a wide range of setups: three rotors, four rotors, six rotors, and eight rotors. There are also more unusual setups like 12 or 16 rotors. Of these, quadcopters with four rotos are one of the more popular setups.

Adding more blades means that there is more thrust being produced. However, each blade must travel through the wake of the one that came before it. That's why there is a limit to how many blades can be used in propeller design.

This is the displacement per single revolution of the propeller. Lower pitch translates to higher torque and lower turbulence, which results in decreased power requirements from the motor. As a result, propellers with lower pitch values increase flight time and allow for heavier payloads. Conversely, propellers with higher pitch move more air per revolution but result in greater turbulence and less torque. 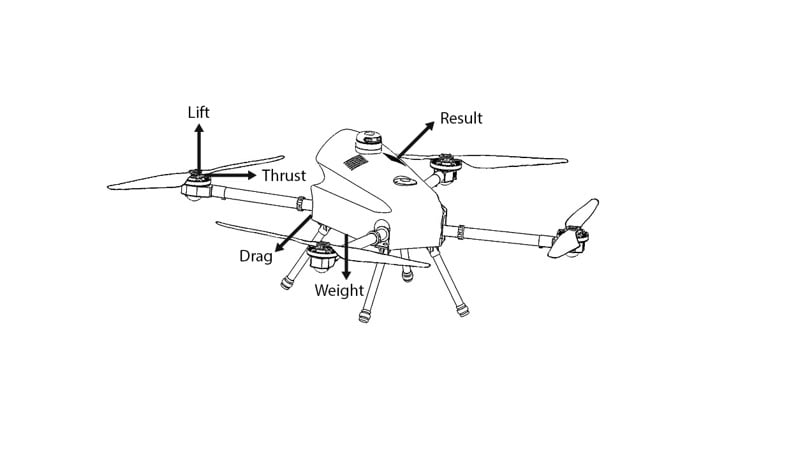 Lift is the force exerted on the drone by the air. It is the result of the interaction between the air and the drone. Lift is perpendicular to the flight direction.

Evidently, the performance of the drone is dependent on the position of the aircraft in the air, and, in turn, the distribution of the lift force is also especially important for controlling the aircraft.

The term drag is a generic term used to describe any force resisting the motion of an object through a fluid. It can be produced by a variety of mechanisms.

The drag of a body moving through a fluid is a force, acting in the opposite direction to the motion of the body, and causing a decrease in the velocity of the body.

Like lift, drag acts on the center of pressure and is dependent on the shape and size of the drone as well as the velocity.

For low-velocity flight, drag can be calculated by the below equation:

In general, drag is calculate with Equation 2.

Thrust is a mechanical force and is dependent on Newton's third law of motion, where for every force there is an equal and opposite reaction force. The spinning of the blades push air down, there is an equal reaction in the air, creating a force in the opposing direction. Accordingly, the direction of the thrust force will be different depending on the mounting of the propellers.

Civilians can now easily and inexpensively make drones for their personal use. Inexpensive prebuilt models are readily available and custom designs can be tailored according to intended use. Multirotor drones present design challenges related to stability and flight control but allow for vertical takeoff and landing. While short flight times pose a challenge for many users, multirotor drones are suited to a wide variety of uses.

By posting a comment you confirm that you have read and accept our Posting Rules and Terms of Use.
Advertisement
RELATED ARTICLES
Morphing aerial drones: Flying robot dragons, bird-mimicking quadrotors and more
How shape-changing drones maintain flight stability
A flapping-wing drone inspired by birds
Lighter-than-air drones: From blimps to balloons
Top 10 Engineering360 articles of 2022
Advertisement