Cotton seeds sprout on the moon's far side

Cotton seeds have sprouted in the small biosphere that China’s Chang’e-4 moon lander delivered to the lunar surface on Jan. 3. This feeds scientists’ optimism that crops grown on the moon could supply future long-range space exploration missions. Although astronauts have previously grown crops on the International Space Station, the Chinese mission is the first to germinate a plant on the moon.

(Read about the Chang’e-4 mission here.)

A team of 28 Chinese universities, led by scientists at Chongqing University, designed several biosphere experiments for this first mission to the far side of the moon. The 3 kg biosphere supplies air, water 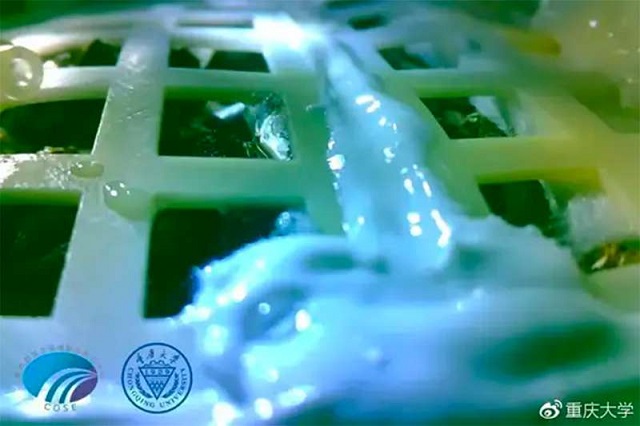 Cotton sprouts on left in moon-based biosphere. Source: Chongqing Universityand nutrients to its passengers, which in addition to the cotton seeds include potato, Arabidopsis and rape seeds, yeast and fruit fly pupae.

Scientists will study how a low-gravity environment affects plant and animal growth. They will also study how strong sunlight on the moon affects photosynthesis, among other experiments. A light pipe guides sunlight into the system.

The challenges in designing a self-sustaining ecosystem for lunar conditions included temperature control, due to lunar surface temperature changes and because organism growth and respiration will affect the biosphere's climate.

For comparison, Chongqing researchers set up an identical control biosphere on earth. The experiments were triggered simultaneously when researchers initiated water flow into the experiments. Cotton seeds have also sprouted in the earth-based control.

Researchers selected the organisms based on the needs of the experimental ecosystem and their potential usefulness for supplying future space flights. The plants can sustain the fruit flies, yeast decomposes fruit fly waste, and the plants use the processed waste for food. If grown on a commercial scale the cotton could turn into clothing, the potatoes into food and rapeseed plants produce oil.

By posting a comment you confirm that you have read and accept our Posting Rules and Terms of Use.
Advertisement
RELATED ARTICLES
Queqaio satellite bridges Earth and the dark side of the moon
NASA selects Firefly Aerospace to deliver 10 experiments to the moon
Common Lawn Nuisance Has Value as Laboratory Pipette
NASA awards Intuitive Machines lunar delivery contract
SpaceX selected by NASA to launch first outpost around the moon
Advertisement