Can a robot replace a human inspector in Zurich’s sewer system? A research team recently deployed a four-legged Anymal robot to find out.

This test is one of several planned for Anymal, a 19.7 in (50 cm) tall robot jointly developed by ETH Zurich and Anybotics, a spinoff established to develop the robot for practical applications. The sewer journey is part of a three-year research project dubbed Thing (subterranean haptic investigator) and conducted by ETH researchers alongside colleagues from universities in Edinburgh, Scotland; Pisa, Italy; Oxford, England; and Poznan, Poland. The project’s goal is to build autonomous robots that understand their environment and function in real-world conditions that might include dust, dampness, darkness and other potential pitfalls.

For the initial trial run Anymal and Anybotics co-founder Peter Fankhauser descended into an overflow sewer tunnel, supported by an above-ground testing team. Many robots navigate environments using 3D cameras and laser sensors. However, these sensitive devices could fail in the damp, pitch-dark sewer. The researchers decided to see whether the robot could steer itself using haptic feedback. Before turning Anymal loose to explore 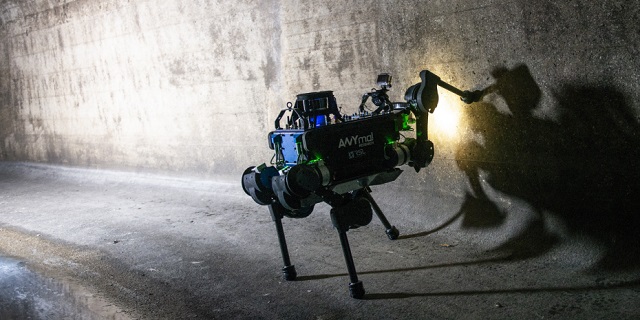 Anymal on its first tour of inspection in Zurich’s sewage system. Source: ETH Zurich / Daniel Winkler, the tunnel was illuminated and Fankhauser positioned the robot via joystick.

The lights were cut when the test started, leaving Anymal to explore on its own in the dark. Fankhauser could intervene if needed, but real-time monitoring and control rested with team members. Even with little light, the onboard laser sensors and camera scanned the environment and sent information to the robot and the team outside the tunnel. During testing the robot transmitted images and a mind-boggling 500,000 measurements per second back to the above-ground team.

As Anymal walked encountered a small ledge in its path. Although it initially struggled, the robot had successfully climbed over similar obstacles in the lab. Success came on its second attempt, when as an observer put it, “[Anymal] elegantly placed one leg after another over the ledge.”

A second test asked the robot to touch the sewer’s side wall with a leg. Since this maneuver was not planned, the controllers improvised, repurposing software that taught Anymal to shake hands to get it to raise a leg and gently touch the wall.

The future for quadrupedal robots

ETH Zurich’s Robotic Systems Lab started work on quadrupedal robots in 2009 and completed the first Anymal prototype in 2016. These robots incorporate sight, hearing and touch capabilities that is useful for many kinds of missions, from inspection tasks to delivering holiday gifts around the office, as it did in the lab’s holiday video, disguised as a reindeer. A future test will send Anymal to a copper mine in Poland.

Anymal’s larger cousins, Boston Dynamics' Spot and SpotMini, also operate indoors and outdoors and can perform similar functions. They are also capable of climbing stairs. A construction site in Japan is testing both Spot robots as inspectors, and they might fill a future role as delivery systems. The company plans to bring the Spots to market in 2019.