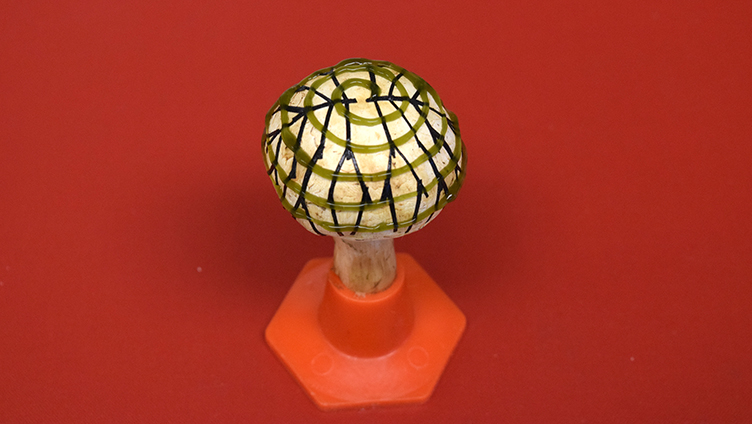 An ordinary white button mushroom from a grocery store has been made “bionic” by researchers at Stevens Institute of Technology in Hoboken, New Jersey.

The team supercharged the mushroom with 3D-printed clusters of cyanobacteria that generate electricity, plus swirls of graphene nanoribbons that collect the current. “We were able to create an entirely new functional bionic system," said Manu Mannoor, an assistant professor of mechanical engineering at Stevens.

Designer bio-hybrids like this are part of a larger effort to improve understanding of the biological machinery in cells, along with finding ways to apply that understanding to the fabrication of new technologies.

Although the ability of cyanobacteria to produce electricity is well known in bioengineering circles, its use has been limited because of its short shelf life on artificial bio-compatible surfaces. The researchers overcame this limitation by choosing the white button mushroom, a natural host of rich microbiota, as their platform.

"We showed for the first time that a hybrid system can incorporate an artificial collaboration, or engineered symbiosis, between two different microbiological kingdoms," said Sudeep Joshi, a postdoctoral fellow in Mannoor’s lab.

The researchers used a robotic arm-based 3D printer to print an “electronic ink” atop the mushroom cap, which contained the graphene nanoribbons. The cyanobacteria clusters were printed as a “bio-ink” in a spiral pattern that intersected the electronic ink at multiple contact points. Shining light on the mushroom activated cyanobacterial photosynthesis, generating a photocurrent.

Mannoor and Joshi also showed that the amount of electricity produced by the bacteria can vary depending on density and alignment -- the more densely packed together they are, the more electricity they produce. Using 3D printing allowed the team to boost the bacteria’s electricity-producing activity 800 percent over what was possible from casting them in a laboratory pipette.

"With this work, we can imagine enormous opportunities for next-generation bio-hybrid applications," Mannoor said. "Some bacteria can glow, while others sense toxins or produce fuel. By seamlessly integrating these microbes with nanomaterials, we could potentially realize many other amazing designer bio-hybrids for the environment, defense, healthcare and many other fields.”

By posting a comment you confirm that you have read and accept our Posting Rules and Terms of Use.
Advertisement
RELATED ARTICLES
Mushroom skin eyed for future computer chip bases
Microbial Biophotovoltaics: Printing with Bacteria
Mushrooms as a Building Insulation Alternative?
Chips, Sensors and Lasers Used to Study Antibiotic Resistant Bacteria
New Method for Biofuel Production Developed from Mushroom Farming
Advertisement