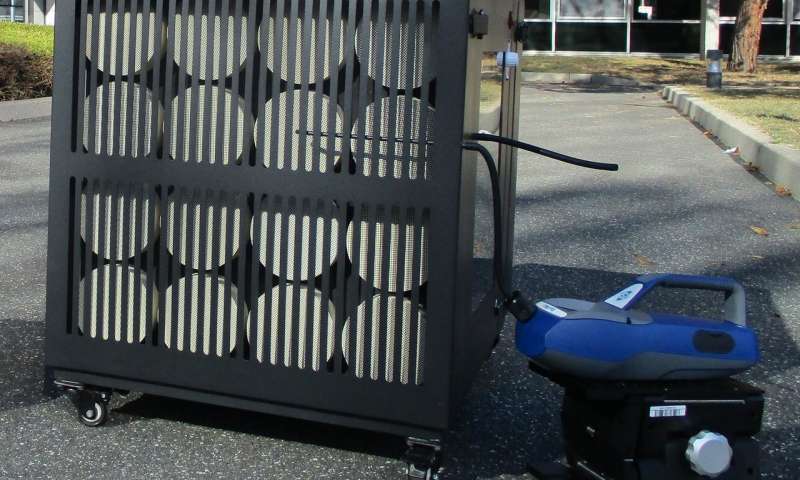 The ceramic filters have been tested in a prototype system but the final design of a full-size filtration station is still being worked out. Source: Corning IncorporatedSet to make its debut at the 2024 Paris Olympics is a new outdoor air filter to cut air pollution levels.

Jean-Jacques Theron, materials director at the Corning European Technology Center, France, and winner of the Horizon Prize on materials for clean air, designed the filter with inspiration from colleagues located in China. The Horizon Prize is an initiative launched by the European Union to find sustainable, affordable and innovative solutions to cutting particulate matter concentrations in urban areas.

"It is very well known that particulate pollution levels in Chinese urban areas can sometimes be pretty high," he said. "There are some places where you cannot even see 10 metres ahead of you. It seems not to be that bad in Europe, but when you start to dig into the data — especially (when you look at) fine and ultrafine particles, some of them are not even visible but they have a detrimental effect to the health."

"The fact is that locally some pretty high levels have been recorded in Europe, which means that there is a need to clean up the air," said Theron.

To tackle the issue, Theron and his team adapted a filter originally designed to ensnare vehicle particulate emissions. However, Theron and his team modified the existing filter to comply with the competition criteria of being affordable, sustainable and environmentally compatible.

"We adapted and developed the filter concept which was initially invented at Corning for mobile emissions. The main challenge here, and one of the reasons why we could not just stick it outside, is the large diversity of particles for outdoor applications — dust, fly ash, smoke, aerosols, fumes, mist and condensing vapours — versus the ones from mobile emissions — soot particles from internal combustion engine emissions," said Theron.

The honeycomb design and ceramic materials of the filter pass air through the device, capturing particulate matter in the walls of the structure and expelling clean air.

The filter is composed of a material called cordierite, which is a mixture of alumina, talc, silica and clay. "These are all-natural inorganic materials," Theron said. The material is durable with a high melting point.

The combination of design and material, according to the team, results in an effective filtration system and the team expects to finalize a design that is roughly 10 m tall and capable of filtering 3.6 million m3 of purified air each day.

To determine its effectiveness, Theron and his team placed filter station prototypes north of Paris and in Shanghai. The prototypes gather air pollution data daily, creating a dataset that enables scientists to monitor pollution levels over time.

Although currently in the prototype stage, the team envisions placing the filters throughout the Olympic Village in time for the 2024 Olympic Games in Paris.

By posting a comment you confirm that you have read and accept our Posting Rules and Terms of Use.
Advertisement
RELATED ARTICLES
Tiki Torch Soot Serves as Surrogate for Diesel Engine Soot
How does a HEPA filter work?
Soy Filter Captures Toxic Chemicals Others Can’t
Achieve maximum system performance and efficiency with Dusthog®
First Emission Neutral Vehicle Goes to Test in Germany
Advertisement