Oregon became the first state to approve the use of science-based building code requirements for tall mass timber buildings. The state's approach could serve as a model for other jurisdictions to follow.

Under Oregon’s statewide alternate method (SAM), developers can receive early technical consideration and approval on tall mass timber structures. The Administrator of the State Building Codes Division issued SAM No. 18-01, which provides a prescriptive path for use of code requirements developed by the International Code Council (ICC) Tall Wood Building Ad Hoc Committee over the past two years.

Oregon's alternate path includes scientific conclusions established by the ICC that were incorporated into 14 national proposals and utilizes concrete, steel or masonry for the vertical elements of the seismic force-resisting system. 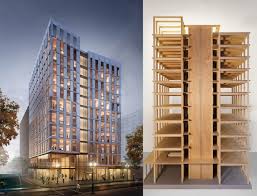 Previously, heavy timber structures were limited to six stories. Major distinctions between these types of construction are found in the required fire-resistance rating of the structure and the protection specified, in terms of timber surface encapsulation.

(Read "How Wood Can Be Used to Create Large Buildings.")

Type IV B buildings with an automatic sprinkler system require two-hour fire resistance-rated primary structural frame elements and bearing walls, with two-hour fire resistance-rated floors. A calculated percentage of the exposed timber surfaces may remain exposed under this type. For certain occupancies or uses, Type IV B buildings may be as tall as 12 stories and 180 ft in building height.

In April, part of a timber building under construction at Oregon State University failed and collapsed. A section of subflooring between the second and third stories of Peavy Hall gave way in the accident. The 4 ft x 20 ft cross-laminated timber (CLT) panel, made up of five layers of 2 x 6 boards glued together at right angles, failed after it delaminated at one end.

And in June 2017, officials in Portland, Oregon, approved plans for a 90,000 ft2, 12-story, mixed-use project that at the time ranked as one of the tallest timber high-rises to be built in North America.

The mixed-use project is called Framework and, if built, would combine retail and public exhibition on the ground level, with five levels of office and 60 units of affordable housing. The architect's web site says the project currently is on hold.

By posting a comment you confirm that you have read and accept our Posting Rules and Terms of Use.
Advertisement
RELATED ARTICLES
One of the World's Largest Timber Towers Proposed for London
CLT Panel Fails in Timber Building Project
How Wood Can be Used to Create Large Buildings
Residence Hall to Showcase Wood's Structural Use in High-Rise Design
Watch: Using a Shake Table to Test "Plyscraper" Concepts
Advertisement