Residence Hall to Showcase Wood's Structural Use in High-Rise Design

One of the tallest wood buildings in the world is under construction at the University of British Columbia, in Vancouver. Upon completion, the 18-story Brock Commons Student Residence will stand 174 feet high and is intended to be a showcase for wood's utility in modern high-rise construction.

The dormitory, due to open in fall 2017, incorporates a hybrid scheme that its designer, Acton Ostry Architects, says combines the benefits of mass wood and concrete to achieve a structural system comparable in cost to that of traditional all-concrete-and-steel buildings.

The hybrid structural system comprises a one-story concrete podium, two concrete cores and 17 stories of mass timber topped with a prefabricated steel beam and metal deck roof. Vertical loads are carried by the timber structure, while the two concrete cores provide lateral stability. Glulam columns with steel connectors provide a direct load transfer between the columns and support five-ply cross laminated timber (CLT) panels on a 2.85m x 4.0m grid that acts as a two-way slab diaphragm, similar to a concrete flatplate slab. The structure will be the first in British Columbia to be built to meet new seismic design requirements for the 2015 National Building Code of Canada. 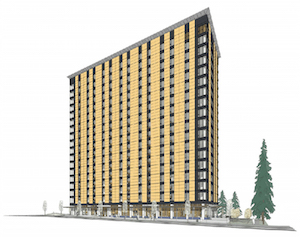 Northwest view of Brock Commons Student Residence. Image credit: Acton Ostry Architects.The prefabricated facade is made up of 8m-long steel-stud frame sections with pre-installed windows. The cladding is high-pressure laminate panels consisting of 70% wood-based fibers. Glazing wraps the corners to dematerialize the edges, and a metal cornice crowns the building. A 58m-long CLT canopy runs the length of the building base, which is wrapped with curtain wall glazing and spandrel panels.

It is projected that the prefabricated mass wood hybrid structure and facade will be erected at the rate of at least one floor per week, resulting in time savings for the overall construction process. To test the speed and efficiency of the erection of the mass wood hybrid structural system, a two-story proof-of-concept mock-up was constructed in July 2015. Erection of the structure went smoothly and assembly was faster than predicted.

According to Acton Ostry, advances in wood technology and manufacturing make tall wood buildings not only possible, but also safe and cost effective, while providing a way to lessen the carbon footprint of the built environment. For Brock Commons, the carbon stored in the mass timber structure, plus avoided greenhouse gas emissions, will result in an estimated carbon benefit of 2,563 metric tons of CO2, which is equivalent to taking 490 cars off the road for a year.

Since the mass wood structure is significantly higher than the six stories currently permitted by the building code for wood structures, the project required a site-specific regulation from the British Columbia Building Safety and Standards Branch. With the project being the first of its kind, the structural and fire safety design utilized a conservative approach to facilitate the approval process to align with the project schedule.

Although construction of the first floor and cores technically could have been constructed utilizing mass timber, concrete was selected in the interest of familiarity regarding life safety, firefighting and the approval processes. The mass wood hybrid structure is encapsulated with multiple layers of gypsum board to achieve required fire resistance ratings and facilitate permitting.

Once projects such as Brock Commons are completed, more testing of mass wood assemblies is available and information from monitoring research programs is analyzed, the architects expect that building codes for tall wood buildings will be revised and mass wood structures will become more commonplace in British Columbia’s development and construction industries.

By posting a comment you confirm that you have read and accept our Posting Rules and Terms of Use.
Advertisement
RELATED ARTICLES
How Wood Can be Used to Create Large Buildings
One of the World's Largest Timber Towers Proposed for London
Timber-Concrete Composite Safe for Construction
Brookfield plans wood timber mid-rise on San Francisco pier
Oregon's Tall Timber Building Rules Could Lead the Nation
Advertisement