How Wood Can be Used to Create Large Buildings 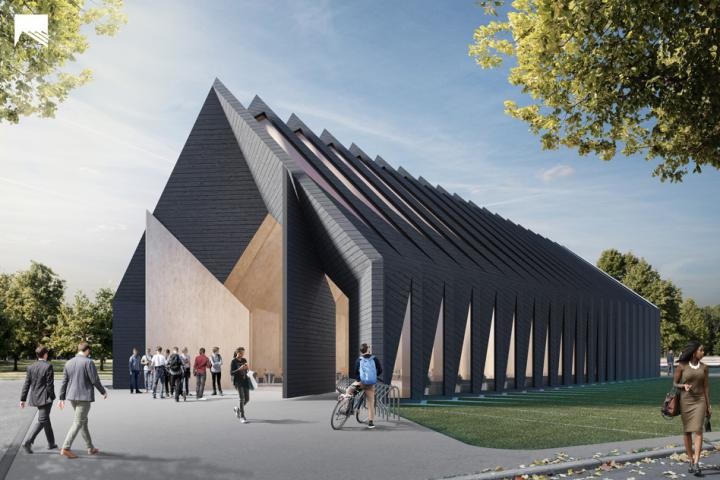 The Longhouse is made of timber that is laminated in order to create giant arches and height. Source: MIT

In the quest to create sustainable, environmentally friendly buildings, researchers have developed 3D-printed concrete housing and have shown how to use materials made from vegetables, rice, glass and fungus to fortify buildings.

Now, MIT has created a new class in energy-efficient design for large community buildings. The design uses massive timbers made of conventional lumber laminated together like a kind of supersized plywood.

The goal is to create safe, sound high-rise buildings that are more efficient and less dependent on emissions-intensive materials.

The class, called Mass Timber Design, exploits the abundance of forest resourcesin North America, much of which is overgrown, said John Klein, a research scientist in MIT’s architecture department.

“There's an effort to find ways to use forest products sustainably, and the forests are actively undergoing thinning processes to prevent forest fires and beetle infestations,” Klein said.

Researchers said wood is used as a suitable material for structures that are typically a few stories high but not for larger structures. Some builders, however, are using mass timber products — any wood products much larger than conventional lumber — for bigger structures such as medium-rise buildings up to 20 stories.

MIT said that this technology could be practical for even taller buildings, pointing to one of the largest mass timber buildings in the U.S., the new 82,000 square foot John W. Olver Design Building at the University of Massachusetts at Amherst.

But can these large wooden buildings be safe from events such as a large fire? Klein said tests have demonstrated that mass timber structures can resist fire better or as well as steel because the wood exposed to fire naturally produces a layer of char, which highly insulates and can protect the bulk wood for more than two hours. Steel, on the other hand, can fail suddenly as the heat softens it.

How They Did It
MIT created a prototype building, called The Longhouse, consisting of massive beams made from layers of wood veneers laminated together, a process called laminated veneer lumber (LVL), made into panels 50 feet long, 10 feet wide and more than 6 inches thick. 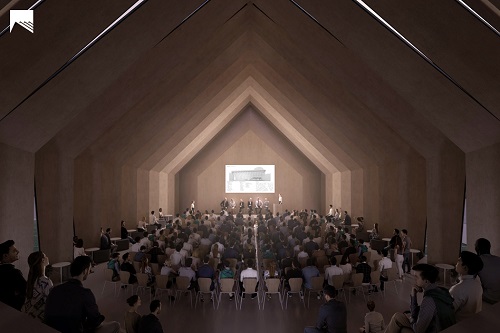 The Longhouse is a prototype that could be used for co-working, exhibitions, teaching and more. Source: MITThese were then cut to size and used to make a series of large arches, 40 feet tall to the central peak and spanning 50 feet across. A series of these arches is assembled to create a large enclosed space with no need for internal structural supports. The roof of the Longhouse was designed for solar panels and windows for natural lighting and passive solar heating.

"The structural depth achieved by building up the triangular section helps us achieve the clear span desired for the communal space, all while lending a visual language on both the interior and the exterior of the structure," said Demi Fang, an MIT architecture graduate student who was part of the design team. "Each arch tapers and widens along its length, because not every point along the arch will be subject to the same magnitude of forces, and this varying cross-section depth both expresses structural performance while encouraging materials savings.”

The Longhouse is a multi-functional building designed to accommodate a range of event scenarios from co-working, exercise classes, exhibitions, lectures and more.

MIT said if this type of building were to be mass manufactured it would be factory-built in sections and then bolted together on site to make the complete building. As the building would be largely prefabricated, the actual on-site construction would be streamlined.

Whereas concrete buildings produce large amounts of greenhouse gases from the baking of limestone, construction using mass timber is the opposite as carbon removed from the air while trees grow is sequestered for as long as the building lasts.

"The building is a carbon sink," Klein said.

Re: How Wood Can be Used to Create Large Buildings
#1

This is not a carbon sink, this is the next devastation of forests of this world.

Re: How Wood Can be Used to Create Large Buildings
#2

This only works with renewable forests not old growth forests.

Unfortunately many forests are grown on steep terrain unsuited to agriculture, but the effect of logging these areas is intense erosion and silting.