After what is being characterized as the longest electricity blackout in U.S. history, the Energy Department's Energy Information Administration (EIA) says that total electricity sales in Puerto Rico returned to pre-Hurricane Maria levels in April and May 2018.

EIA says, however, that residential electricity sales continue to lag historical levels, reflecting what it says are continued outages.

Hurricane Maria, a Category 4 hurricane, made landfall in Puerto Rico on Sept. 20, 2017, two weeks after Hurricane Irma passed north of the island. The Puerto Rico Electric Power Authority (PREPA) utility reported that all 1,570,000 of its electricity customers were without power immediately after Hurricane Maria. The storm destroyed much of the territory’s vulnerable and outdated transmission and distribution infrastructure. As a result, outages continued even as power plants resumed operation. 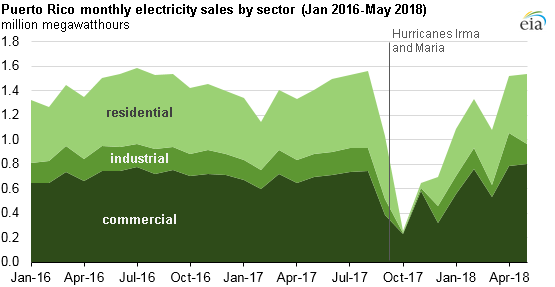 Credit: EIAn particular, residential and industrial electricity sales in October 2017 fell to 3 percent and 6 percent of their average levels in the previous October.