Data show that it took nearly a year for net electricity generation on Puerto Rico to begin to approach levels posted in the months before Hurricanes Irma and Maria damaged the island’s electricity grid in September 2017.

The data were reported by the Energy Department's Energy Information Administration (EIA).

Puerto Rico’s net generation dropped from 1.57 million megawatthours (MWh) in August 2017 to 0.27 million MWh in October 2017, EIA said. According to U.S. Department of Energy situation reports, about 96% of customers had their power restored as of April 2018, but net electricity generation remained relatively low for several more months.

Repair and modernization efforts are under way, and Puerto Rico's electricity authority released in late October a $20 billion, 10-year plan to rebuild the island's grid. The plan includes a more decentralized approach to electric power generation and distribution, including microgrids, natural gas-fired power plant and cybersecurity and emergency preparedness enhancement.

The automated digital substation will be built at the Monacillo Control Center in the San Juan-metro area and serve as a model for rebuilding the 17 substations that were flooded during Hurricane Maria.

NYPA also is helping to reconfigure the Culebra power plant to ensure that it will be able to provide electric service to both Culebra and Vieques in the event that the island systems experience a power disruption. As part of its scope of work, NYPA will help design two planned hybrid-microgrid projects on Culebra and Vieques that will incorporate solar panels, battery storage and emergency generators.

In the four months immediately following the hurricanes (October 2017 through January 2018), petroleum- and natural gas-fired generation continued at lower than pre-hurricane levels. Generation from coal and renewable energy resources was entirely offline. 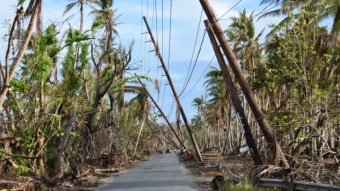 Source: U.S. Army Corps of EngineersIn each of those four months, petroleum was the most prevalent fuel used for electricity generation, EIA said, ranging from 55% to 78% of the total, and natural gas powered the remaining electricity generation. Generation from coal and renewables both began to supply electricity to the grid in February 2018, but both remained slightly lower than their pre-hurricane levels for the rest of 2018.

Natural gas was the most prevalent electricity generation source in eight of those 11 months (February to December 2018), EIA said. All of Puerto Rico’s natural gas is imported as liquefied natural gas (LNG) from Trinidad. An LNG capacity expansion that was planned before the hurricane ultimately entered service in May 2018, allowing the island to import 50% more natural gas than it could in 2017.