Puerto Rico's Power Is Slow to Return After Maria

More than one month after Hurricane Maria made landfall, electricity service had not been restored to most residents of the U.S. territory of Puerto Rico. As of October 23, the Puerto Rico Electric Power Authority (PREPA) had restored service to 18% of customers in 35 of 78 municipalities.

Hurricane Maria, a Category 4 hurricane, made landfall in Puerto Rico on September 20. PREPA reported all 1,570,000 of its electricity customers were without power after the storm. 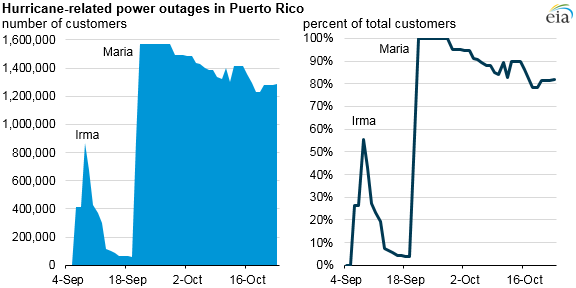 Credit: EIAHurricane Maria destroyed much of the territory’s transmission infrastructure, and as a result, outages linger even as power plants are being prepared to resume operation. The 30-day assessment was made by the Energy Department's Energy Information Administration.

On September 6, two weeks before Hurricane Maria made landfall on Puerto Rico, Hurricane Irma passed north of the island. In the days following Hurricane Irma, nearly 900,000 customers were without power, based on data compiled in the Department of Energy's Situation Reports. By September 19, PREPA had restored power to 96%, or all but about 63,000, of Puerto Rico’s electricity customers.

In mid-October the PREPA Board of Governors approved a $300 million agreement with Whitefish Energy for work related to restoring the island's electric grid. Montana-based Whitefish has been working for PREPA since Sept. 26 to repair and reconstruct electrical transmission infrastructure on the island. 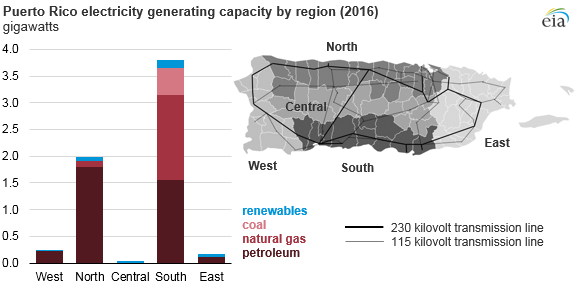 PREPA is working with U.S. federal partners and private industry to restore electricity to the territory. Immediate projects include providing power to facilities such as hospitals, shelters, schools and water pumping stations. The U.S. Army Corps of Engineers awarded contracts to provide temporary power stability to the San Juan metropolitan area, with a planned operation date of October 25.