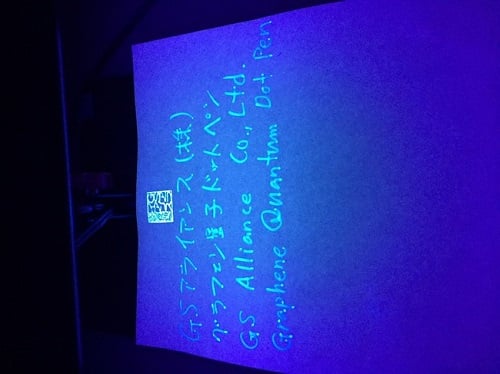 Prepared graphene quantum dot ink can be printed on various types of substrates including normal paper and films. It is invisible under normal room light but depending on the different wavelength of illuminated light, it becomes visible and its emission spectra peak will be different. This makes it appropriate for applications such as an anti-counterfeiting pen and stamp because normal fluorescent dye-based, anti-counterfeiting ink emits only a certain spectrum with the same peaks no matter what wavelength of light is illuminated.

Fuji Pigment Co. Ltd. is working with Green Science Alliance to help combine quantum dot and ink technology together for commercialization of graphene quantum dot ink for pen and stamp.

Quantum dots are extremely small fluorescent nanoparticles composed of between 10 to 1,000 atoms and 0.5 and 9 nanometers in diameter. They are so small you can’t see them with a typical microscope. The color of quantum dots can be controlled by changing their size meaning bigger dots emit longer wavelength colors such as red, while smaller dots emit shorter wavelengths resulting in colors such as green or blue.