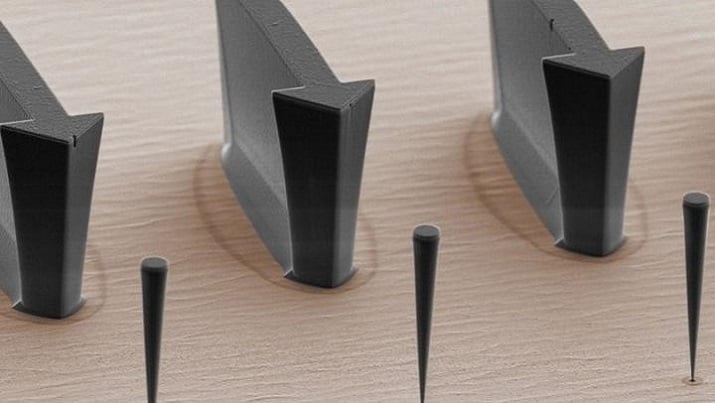 As published in Nature Communications, the gallium arsenide nanowire serves as a microscopic mechanical resonator. The researchers arranged nanowires measuring about 10 micrometers long on a substrate; the wires taper sharply downwards to a base of just 200 nanometers wide. They placed a quantum dot that can emit individual light particles, or photons, near each base.

Thermal or electrical excitation causes the nanowire to oscillate back and forth, producing strains that affect the quantum dot at the base and change its wavelength (and thus the color of the photons emitted by the change). Using microscopes with very stable lasers developed at the university, the movement of the nanowire could be detected with a sensitivity of 100 femtometers. Conversely, the scientists expect that the oscillation of the nanowire can be increased or decreased as desired via excitation of the quantum dot with a laser.

According to University of Basel physics professor Martino Poggio, one of the paper’s co-authors, there are various potential applications for this mutual coupling. "For example, we can use these coupled nanowires as sensitive sensors to analyze electrical or magnetic fields," he said.

"It may also be possible to place several quantum dots on the nanowire, to use the motion to link them together and so pass on quantum information," added colleague Richard Warburton, another of the paper’s co-authors. "We are particularly fascinated by the fact that a link between objects of such different sizes is possible," Warburton said.

Quantum dots are nanocrystals that behave similarly to atoms, although at typical measurements of 10 to 100 nanometers they are significantly larger. Freedom of movement of electrons in quantum dots is restricted; the resulting quantum effects give them unique optical, magnetic and electrical properties.