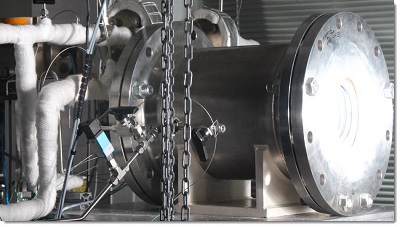 The miniature power plant setup in the laboratory. Source: DLR

A laboratory scale approach to the renewable production of hydrogen has been demonstrated for the first time by researchers at the German Aerospace Center (Deutsches Zentrum für Luft- und Raumfahrt; DLR). High-temperature electrolysis was achieved by use of solar-thermal steam. Linkage of the two technologies was dependent on the development of sophisticated control mechanisms to stabilize steam pressure.

The researchers generated the 750 degrees Celsius steam required for electrolysis by exploiting solar heat and the heat of the high-temperature electrolysis unit. A special solar receiver was designed to capture the radiation from an artificial sun in the solar simulator at the DLR Institute of Solar Research in Cologne. Water passing through the receiver was converted into steam. Control technology was also required at this point, so that the miniature hydrogen power plant could be assembled and tested in an experiment.

To guarantee a reliable supply of steam even when the Sun either does not shine or does not shine with sufficient intensity, the team also developed a concept for a suitable thermal store, and implemented this on a separate test stand.

Simulations show that hydrogen can be generated in a renewable manner at an overall efficiency of between 20 and 25 percent if high-temperature electrolysis and solar-thermal energy are combined. The size of solar-thermal installations can be scaled up relatively easily, and the researchers suggested that very large installations with capacities of more than 100 MW are feasible.