Advanced testing and modeling have shown that an innovative small modular reactor (SMR) being developed by NuScale Power can generate an additional 25% more power per module for a total of 250 MW thermal or 77 MW electrical. 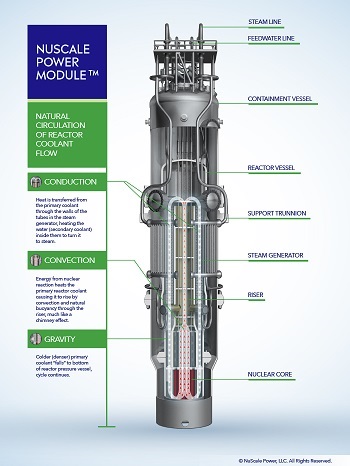 Diagram of the SMR. Source: NuScale Power overnight capital cost of the facility on a per kilowatt basis from an expected $3,600 to approximately $2,850. The scalable, 12-module power plant will now approach a size that renders it competitive in the gigawatt-size market.

The capacity increase translates into the production of 2,053 kg/hour, or almost 50 tons/day, of hydrogen by one 77 MW unit, a marked increase from the previous estimate of 1,667 kg/hour or 40 tons/day. The hydrogen produced by a NuScale high-temperature steam electrolysis system is now cost competitive with high capacity factor renewable hydrogen cost estimates.

The method that NuScale uses to produce hydrogen is based on superheated steam and electricity. Water is heated to a temperature of 300° C by the reactor after which the steam temperature is increased to 860° C using 2% of the module’s output and directed to the high-temperature steam electrolysis system.

The SMRs can be switched into and out of hydrogen production as the demand for electricity fluctuates using technology estimated to reduce annual carbon dioxide emissions by 168,000 tons/module.

In September 2020, the U.S. Nuclear Regulatory Commission completed its Phase 6 safety evaluation review for the NuScale SMR, putting the company on track to receive a full design certification from the regulator by August 2021. Upon receiving full certification, utilities will be able to reference the design when applying for a combined license to build and operate the new reactors in the U.S. The first of the NuScale SMRs is scheduled to come online in 2029 at the U.S. Department of Energy’s Idaho National Laboratory facility, with 11 more to follow in 2030.

By posting a comment you confirm that you have read and accept our Posting Rules and Terms of Use.
Advertisement
RELATED ARTICLES
Westinghouse and EDF aim to jointly develop an SMR
SMR Can Reduce Plutonium Stockpiles
NuScale Commissions Second SMR Simulator
Ontario Power Will Back NuScale's Canadian SMR Bid
First US small modular reactor design approved by NRC
Advertisement