Using Artificial Intelligence to Predict Probability of Life on Other Planets 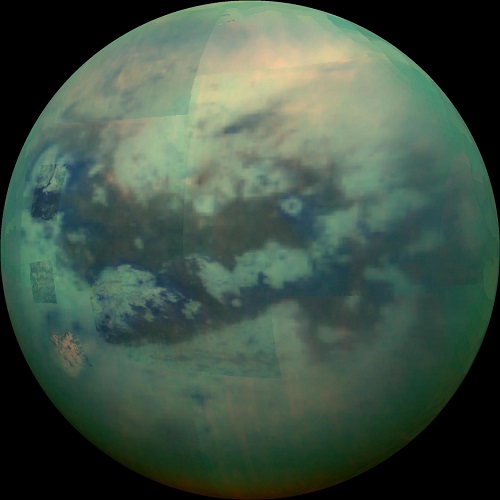 An infrared view of Saturn’s moon Titan. Some measures believe Titan has the highest habitability rating of any world other than Earth. Source: NASA CassiniResearchers at Plymouth University are using artificial neural networks (ANNs) to classify planets into five types in order to estimate the probability of life in each case. The work could be used for future interstellar exploration missions.

ANNs are systems that attempt to mimic the way the human brain learns. These systems are used in machine learning and are good at identifying patterns that are too complex for a biological brain to process.

The five different planet classifications are based on whether they are most like the present-day Earth, early Earth, Mars, Venus or Saturn’s moon Titan. These space bodies are known to be rocky, have atmospheres and are among the most potentially habitable objects in our solar system.

"We're currently interested in these ANNs for prioritizing exploration for a hypothetical, intelligent, interstellar spacecraft scanning an exoplanet system at range,” says Christopher Bishop, researcher at Plymouth University’s Centre for Robotics and Neural Systems. "We're also looking at the use of large area, deployable, planar Fresnel antennas to get data back to Earth from an interstellar probe at large distances. This would be needed if the technology is used in robotic spacecraft in the future."

The atmospheric observations of the five Solar System bodies are presented as inputs to the neural network, which is then asked to classify them in terms of the planetary type. Because life is only currently known to exist on Earth, the classification uses a “probability of life” metric which is based on the relatively well-understood atmospheric and orbital properties of the five target types.

The researchers say they trained the network with more than 100 different spectral profiles, each with several hundred parameters that lead to habitability.

"Given the results so far, this method may prove to be extremely useful for categorizing different types of exoplanets using results from ground-based and near-Earth observatories," says Dr Angelo Cangelosi, the supervisor of the project at Plymouth University.

The method may also be suited for targets of future observations due to the increase in spectral detail from upcoming space missions such as the European Space Agency’s Ariel Space Mission and NASA’s James Webb Space Telescope.

By posting a comment you confirm that you have read and accept our Posting Rules and Terms of Use.
Advertisement
RELATED ARTICLES
After 40 Years, the Voyagers Continue
NASA Studies the Possible Cosmic Origins of Life
Smart spacesuits and solar surfing highlight NASA’s latest investments
NASA retires the Spitzer Space Telescope
Earth-sized exoplanet discovered by NASA’s TESS satellite
Advertisement