After 40 Years, the Voyagers Continue

In August/September 2017, humanity’s farthest-reaching and longest-lived spacecraft, Voyager 1 and 2, mark their 40th anniversary of operation and exploration. The spacecraft have left the planets far behind — neither will come close to another star for 40,000 years — but their probes continue to send back observations in daily communications with NASA. 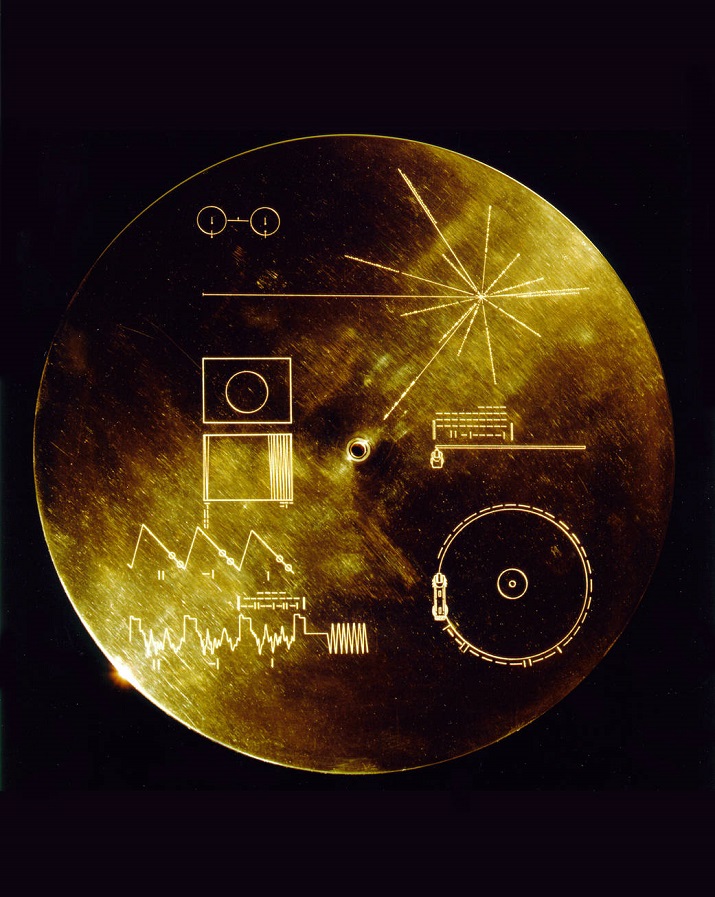 The Golden Record's cover design protects it from micrometeorite bombardment -- and includes a diagram explaining how to play it. Image credit: NASA.

They have also set numerous records over the past four decades. In 2012, Voyager 1, launched in September 1977, became the only spacecraft ever to have entered interstellar space — outside of the enormous, bubble-like heliosphere that contains the plasma stream of the Sun, and toward the rest of the galaxy. From its transmitted data, researchers have learned that cosmic rays (atomic nuclei accelerated nearly to the speed of light) are as much as four times more abundant in interstellar space than in the vicinity of Earth — meaning that the heliosphere effective acts as a radiation shield for the planets.

Voyager 2, launched in August 1977, is the only spacecraft to have flown by all four outer planets. Now almost 11 billion miles from Earth, interpreting its data alongside that of Voyager 1 allows scientists to compare two regions of space where the heliosphere interacts with the surrounding interstellar medium.

Together, the Voyagers have also made numerous discoveries, including the first active volcanoes beyond Earth (on Jupiter’s moon, Io), and the most Earth-like atmosphere in the solar system (on Saturn’s moon, Titan).

"I believe that few missions can ever match the achievements of the Voyager spacecraft during their four decades of exploration," said Thomas Zurbuchen, associate administrator for NASA's Science Mission Director. "They have educated us to the unknown wonders of the universe and truly inspired humanity to continue to explore our solar system and beyond."

Both spacecraft have a power supply comprised of three radioisotope thermoelectric generators that run on heat energy from the slow decay of plutonium-238. After 88 years, their tanks will still be half-full.

Their power decreases by four watts per year, however; to maximize their lifespans, engineers are learning to tighten their belts in terms of power consumption. In doing so, they need to reference commands and software written decades ago. "The technology is many generations old, and it takes someone with 1970s design experience to understand how the spacecraft operate and what updates can be made to permit them to continue operating today and into the future," said Suzanne Dodd, Voyager project manager based at NASA's Jet Propulsion Laboratory in Pasadena, California.

Team members estimate that the last science instrument will need to be shut off by 2030. But even after the spacecraft go silent, they will continue on their trajectories at their present speed of more than 30,000 miles per hour — completing an orbit within the Milky Way every 225 million years.

Built by the Jet Propulsion Laboratory managed by Caltech, it’s possible that the Voyagers will continue to last for billions of years. Each carries a Golden Record of Earth sounds, pictures and messages — circular time capsules that could one day serve as the only traces of human civilization.

By posting a comment you confirm that you have read and accept our Posting Rules and Terms of Use.
Advertisement
RELATED ARTICLES
NASA contacts Voyager 2 for the first time since March
Gravity Slingshot: How One Grad Student's Insight Launched Interplanetary Exploration
NASA retires the Spitzer Space Telescope
Hubble Space Telescope: The Bad, the Ugly, and (Finally) the Good
Using Artificial Intelligence to Predict Probability of Life on Other Planets
Advertisement