Numerous theories and debates abound as to the origin of life on Earth. There’s the something-from-nothing 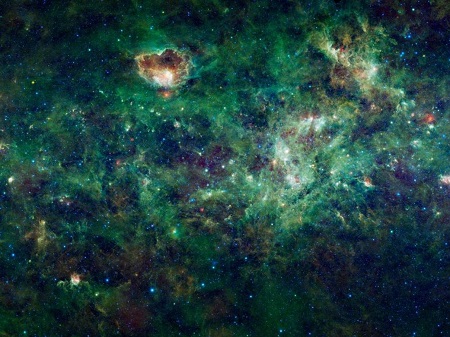 This mosaic of the Milky Way galaxy from NASA's Wide-field Infrared Survey Explorer shows areas of interstellar space where nebulas are forming into new stars. Source: NASAtheory of abiogenesis, which posits that life arises from non-living matter via natural processes. The deep-sea vent theory suggests that life may have begun at submarine hydrothermal vents spewing key hydrogen-rich molecules.

Perhaps life did not begin on Earth and was brought here from elsewhere in space, in accord with the panspermia proposal. NASA researchers may have lent credence to this theory by creating the 2-deoxyribose sugar component of DNA in a vacuum chamber that simulates interstellar space.

The scientists replicated the frigid, dusty and gaseous medium of interstellar space by using the vacuum chamber to bring an aluminum material to almost absolute zero. The addition of a water vapor-methanol mixture resulted in ice film formation on the aluminum. Analysis of the material’s structure and chemistry following UV irradiation of the chamber revealed the presence of sugar derivatives, including 2-deoxyribose.

The same deoxysugar derivatives have also been identified in carbonaceous meteorites, indicating a possible guide for how early life, and its components, hitchhiked through the universe.

The NASA study is published in Nature Communications.

By posting a comment you confirm that you have read and accept our Posting Rules and Terms of Use.
Advertisement
RELATED ARTICLES
NASA builds structure for keeping fluids cool in space
Using Artificial Intelligence to Predict Probability of Life on Other Planets
Smart spacesuits and solar surfing highlight NASA’s latest investments
Low Outgassing Adhesives: Characteristics, Tests and Applications
After 40 Years, the Voyagers Continue
Advertisement 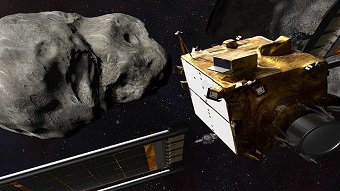