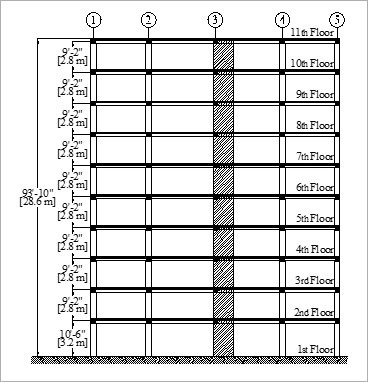 Elevation view of the building. Source: American Concrete Instituteseismic risk. To fill this gap, researchers evaluated the expected behavior of a 10-story reinforced concrete building with intermediate moment frames and ordinary walls under design-level seismic shaking. The seismic demand on the building was estimated following ASCE 7 procedures for an intermediate seismic hazard site. The structural system was assigned Seismic Design Category C and was designed and detailed following ACI 318-11 provisions.

A suite of 52 pairs of unscaled earthquake ground motions was selected to represent design level shaking. The 5 percent damped spectral accelerations of the selected ground motions have median values that approximate the elastic design response spectrum. The software package Open System for Earthquake Engineering Simulation (OpenSees) was selected for this purpose because its nonlinear analyses capabilities have been demonstrated by many researchers and because it facilitated conducting a large number of simulations. Beams, columns and walls were modeled using distributed plasticity elements and fiber sections at the integration points.

Results enabled comparison of the expected performance of a code-compliant structure and actual performance as represented by the numerical model. The prescriptive code-based approach was determined to lead to critical underestimation of seismic demands. Of particular concern were the anticipated shear forces, which for some key structural components are beyond the design capacities. Coupled with structural detailing employed in these structures, the results indicate a high potential for relatively brittle failures in some key components during design-level shaking.

The analysis provides a perspective on the effectiveness of building code design provisions and on opportunities for improvement.

Researchers from University of California, Berkeley, and Universidad del Norte in Columbia participated in this research, which is published in ACI Structural Journal.

By posting a comment you confirm that you have read and accept our Posting Rules and Terms of Use.
Advertisement
RELATED ARTICLES
Metro Vancouver buildings more vulnerable to large earthquakes than seismic guidelines indicate
Seattle revises building code to account for stronger quakes
Winds, earthquakes and wind turbine performance
Bay Area Water Tunnel Engineered for Seismic Activity
Engineering Buildings That Rock in an Earthquake
Advertisement