New research on the effects of a major earthquake have led officials in the Washington State cities of Seattle and Bellevue to revise seismic standards for new buildings 240 ft or taller.

The revisions stem from a four-year study by engineers and scientists to better estimate shaking from a magnitude 9 (M9) earthquake in the Pacific Northwest. The news was reported by the Seattle Times newspaper. 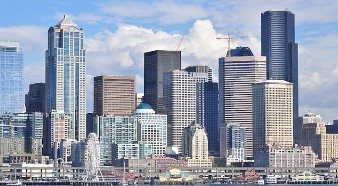 Downtown Seattle skyline from Elliott Bay. Source: Joe Mabel/CC BY-SA 4.0The research focused on an offshore fault called the Cascadia Subduction Zone, which last ruptured more than 300 years ago. Given that length of time, scientists have scarce data to predict how high-rise buildings around the Puget Sound region may perform. In addition to Seattle, the Washington cities of Tacoma and Everett, and Portland, Oregon, sit on or near similar basins.

In early December, a magnitude 7.0 quake hit the area around Anchorage, Alaska. As of early January, some 1,200 structures needed inspection for damage that resulted from the quake. A magnitude 9.2 quake hit the same region in 1964, and was about 160 times more powerful.

Seattle's revised code requires buildings to be engineered for earthquake forces 20% to 25% stronger than before, the newspaper said. One engineer estimated that the revision could add as much as $10 per square foot to the cost of a 40-story residential tower. With construction costs for high-rises in Seattle averaging about $300 per square foot, that represents about a 3% increase, the paper said. In practice, wall thicknesses would be increased and more rebar would be used, one engineer told the paper.

Results from the so-called M9 project found that the sedimentary basin that lies beneath the city can amplify ground motion by a factor of two to five, much more than previous estimates. The newspaper said that glacial soils in a basin as much as four miles deep can result in seismic waves that are reflected and trapped within the basin, much like water sloshing in a bathtub.

Structural engineers quoted by the paper said that modern high-rises are unlikely to collapse in a big earthquake even if they don’t meet Seattle’s new standards. The building code allows up to a 10% chance of collapse for new high-rises subjected to intense shaking from rare and extremely powerful earthquakes. 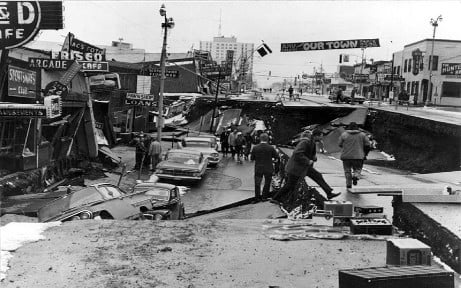 Damage to downtown Anchorage, Alaska, after the magnitude 9.2 earthquake of 1964. Source: US Geological SurveyThe city reportedly held off on issuing its building code revisions until early December, which meant that projects that had not yet broken ground, but were in the design pipeline, would not be affected. The newspaper said that exempted 18 high-rises currently under review, including two buildings taller than 50 stories.

Of greater concern may be older high-rises that already were known to have a greater risk of serious damage and collapse. Some are supported by steel frames with a type of welded joint now known to be fracture-prone, while others were built of poorly reinforced concrete, the paper said. Many of Seattle’s high rises were built between 1960 and 1994, when the fracture-prone welds were commonly used. Even so, many of the city's older, steel high-rises are supported by multiple columns, beams and welds. That means that even if several welds fracture, the building will likely remain standing.

The M9 team examined records from subduction-zone earthquakes around the world, including a 2011 magnitude 9 quake in Japan, which caused a tsunami that killed thousands and led to the Fukushima nuclear power plant accident. Researchers also ran computer simulations of dozens of different Cascadia earthquake scenarios. The newspaper said that the simulations were the most detailed ever for the Pacific Northwest, and covered more than a billion grid points.

The research reportedly showed that slow shaking from an M9 event matches the natural resonance of tall buildings, causing them to sway. That type of shaking will most likely be intensified by the Seattle basin and its sedimentary soils.

The newspaper said that the magnitude 8.1 subduction zone earthquake that hit Mexico City in 1985 occurred more than 200 miles away. Even so, violent shaking amplified by the underlying basin collapsed nearly 400 buildings, mostly newer mid- to high-rises. In some places, the shaking was three times stronger than the building code anticipated.

The M9 analysis did not consider an earthquake on the Seattle Fault, but scientists plan to run similar computer simulations for that scenario over the next year or so.

By posting a comment you confirm that you have read and accept our Posting Rules and Terms of Use.
Advertisement
RELATED ARTICLES
Metro Vancouver buildings more vulnerable to large earthquakes than seismic guidelines indicate
Flexible Materials Help Keep Bridges Open in a Big Quake
USGS: 7 Million Live, Work Near Induced Quake Zones
Sensors could speed up structural evaluations after a big quake
Harnessing Earthquake Power to Generate Energy
Advertisement