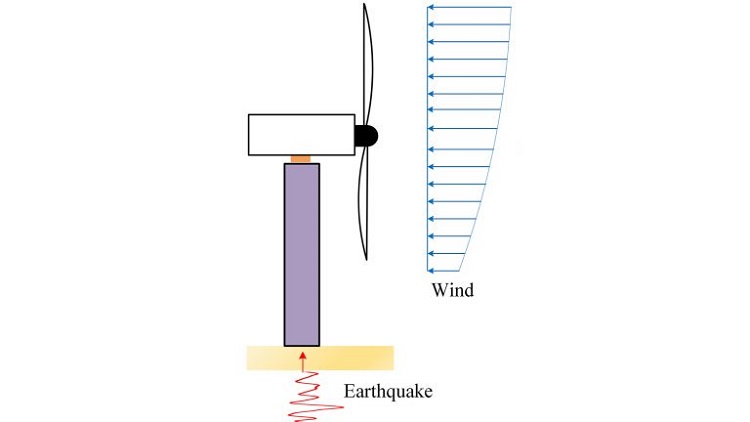 Wind turbine installations are increasing worldwide, and their construction in regions subject to seismic activity raises concerns over the response of these power systems to loads imposed by earthquakes. An assessment of wind turbine response to seismic events was conducted by researchers from Changzhou University and Beijing University of Technology, China.

The analysis published in the Journal of Renewable and Sustainable Energy considered the dynamic behavior of a 5 MW wind turbine subjected to wind-earthquake combination loading. After the wind turbine design, wind field, input ground motions and aerodynamic models were defined, the characteristics of the seismic response of the turbines were investigated based on a fully coupled model by using the FAST code.

Changes in the wind were observed to increase and decrease the response amplitude of the wind turbine under weak and strong earthquakes, respectively. Wind simultaneously exerts a dynamic loading and damping effect on the seismic response of wind turbines. When the ground motion is strong, the energy dissipated by the aerodynamic damping is greater than the work associated with aerodynamic loading. In this case, the wind reduces the system response, and the damping effect is dominant. The dynamic loading effect is dominant when earthquake ground motion is weak, and the system response is increased by wind.

The researchers determined that wind speed at hub height exerts a strong influence on turbine dynamic behavior under operational condition, and that seismic response is most significant under different earthquakes when this speed is close to the rated turbine wind speed.

By posting a comment you confirm that you have read and accept our Posting Rules and Terms of Use.
Re: Winds, earthquakes and wind turbine performance
#1