Some phosphorus-containing organic compounds, such as the nerve agent VX, are extremely hazardous to the human nervous system. These organophosphates are widely used in many insecticides and herbicides, and while chromatographic and other techniques are available to detect them, these usually require sophisticated equipment or time-consuming procedures.

Two types of analytical sensors developed at the National University of Singapore can detect these nerve agents and other toxic chemical compounds in a simpler way and provide results in a much shorter time. One sensor targets non-water soluble compounds and is made from a commercially available thermoplastic material, polyvinylidene fluoride (PVDF). The PVDF thermoplastic was fabricated using a unique molecularly imprinted polymer (MIP)-based method that uses polymers directly instead of monomers. The other sensor detects chemical compounds in aqueous solutions and uses a biologically compatible polymer, polydopamine (PDA). The researchers developed a “dry” MIP-based process during the pre-assembly stage so that a larger variety of molecular species can be detected by these sensors.

The sensors are produced with an imprinting technique at the molecular scale to create unique patterns of the target molecules on polymeric materials. These patterned polymers — MIPs — will then contain specific patterns with spaces that fit exactly with the target molecules. If present in the environment, the target chemical will attach to the sensor film, causing an increase in the mass. By attaching a piezoelectric quartz crystal microbalance (QCM) to it, this minute change in mass can be easily detected.

The researchers say these sensors could accurately detect less than 20 micrograms of organophosphate pesticides in 1 litre of water in three minutes. Conventional methods typically complete the analysis in a time range of about 5 to 15 minutes. Miniaturization of the detection system to about half the size of a smartphone would enhance its portability for rapid onsite analysis of potential threats. 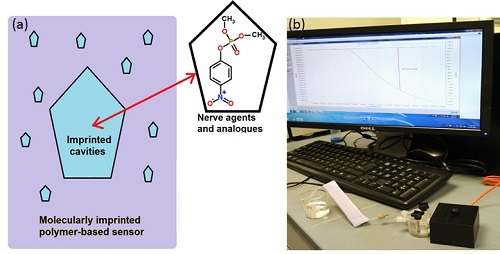 (a) The principle of MIP-based sensors, in which unique patterns of target molecules are imprinted on a polymer-based sensor film and (b) an experiment being carried out using the MIP-based sensor in the laboratory. The sensor response captured by the QCM is displayed on the screen. Source: National University of Singapore

By posting a comment you confirm that you have read and accept our Posting Rules and Terms of Use.
Advertisement
RELATED ARTICLES
“Lab-on-a-Glove” Could Bring Nerve Agent Detection to a Wearer’s Fingertips
New sensor can detect nerve toxins
Pen-like sensor detects dangerous nerve agents, spoiled food
Detecting Disease Markers Through Breath
Wearable for crops monitors for disease and stress
Advertisement