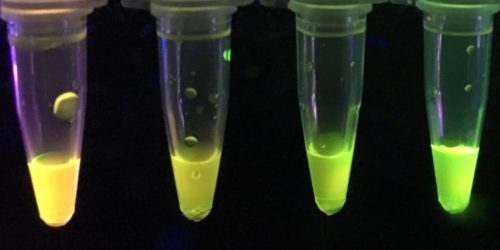 Source: Chris RobidilloChemists from the University of Alberta have developed a paper-based sensor capable of detecting nerve toxins associated with chemical warfare.

According to its developers, the sensor’s silicon-based quantum dots enable the sensor to detect the nerve agents parathion and paraoxon. Detection of either toxin will change the paper-based sensor to either yellow or green, according to their amounts within a sample.

To develop the sensor, the team added green fluorescent protein to silicon-based quantum dots that emit red light. Introduced to either parathion or paraoxon, the mixture turns shades of yellow and green under fluorescent light, and will no longer emit the red light.

With an accompanying smart phone app, accurate estimates of the respective toxins and their amounts present in samples can also be determined, expediting detection.

Previously, parathion had been used as a pesticide before it was discovered to have links to cancer, birth defects, and depending on exposure amounts, death. Meanwhile, paraoxon, which is thought to be roughly 50 times more toxic than parathion, was a suspected chemical warfare weapon used by the apartheid regime in South Africa.

The team of University of Alberta chemists hopes to expand the paper-based sensors so that they can detect other substances and toxins as well in the future.

The findings appear in the journal ACS Applied Materials & Interfaces.

The paper-based sensor from the University of Alberta joins a host of other emerging tools for detecting dangerous chemicals. Scientists from Far Eastern Federal University (FEFU) have developed a black silicon-based detector that detects in trace amounts the presence of nitroaromatic compounds associated with explosives and toxic pollutants. Similarly, researchers from the University of Barcelona have outfitted a nanodrone with nanometric, metal-oxide gas sensors that react to dangerous substances, including carbon monoxide, methane and other organic volatile compounds such as acetone, ethanol and benzene, following the collapse of a building.

By posting a comment you confirm that you have read and accept our Posting Rules and Terms of Use.
Re: New sensor can detect nerve toxins
#1

Now an easy method to determine how much poison is in our food!