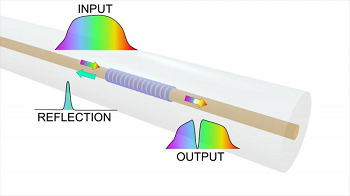 Fiber Bragg gratings are used to turn an optical fiber into a sensing element by reflecting a specific wavelength back in the direction from which it came. Source: Maria KonstantakiA fiber Bragg grating is an optical element inscribed in an optical fiber, which is widely used as a sensing instrument. These devices are commonly used for applications such as real-time monitoring of the structural health of bridges or tracking the integrity of airplane wings. With the recent development of bioresorbable calcium-phosphate glass optical fibers, such gratings can now be applied to medical diagnostics and in-body monitoring.

The new bioresorbable optical fiber Bragg gratings could be used to sense pressure at joints or act as tiny probes that can safely reach and assess the heart and other organs. Laser-based techniques for removing tumors might also be improved with these optical fiber gratings, which could simultaneously deliver the laser beam and provide the accurate real-time temperature sensing necessary to monitor the laser ablation process. The sensors break down similarly to dissolvable stitches, eliminating the need for their removal after use

Optical fiber Bragg gratings are assembled using a laser to inscribe an optical fiber with a pattern that causes the fiber to reflect a specific wavelength back in the direction from which it came. A tilted optical fiber Bragg grating allows some of the reflected light to escape from the fiber core and enter into the surrounding cladding. Tilted gratings are often used for sensing because changes on the fiber cylindrical surface modify the back-reflected light in a way that can be monitored.

The researchers designed both tilted and standard optical fiber Bragg gratings to better understand how the parameters used for inscription affected the grating sensing characteristics. Exposing the bioresorbable fiber to ultraviolet laser light with a given spatial intensity distribution was observed to produce a corresponding surface relief pattern in the optical fiber volume after dissolution.

After confirming that the patterns created by the inscription process operated as a fiber Bragg grating, the researchers immersed fibers with and without fiber Bragg gratings into a solution simulating the pH and temperature conditions of the human body for 56 hours. They found that the glass that had been etched with laser light dissolved faster than unexposed glass.

Systematic experiments are underway to better understand how the fiber composition and ultraviolet laser irradiation conditions affect the speed at which the fiber Bragg grating dissolves. This information could be used to create fiber Bragg gratings that dissolve within a specific time period.

The research, conducted by scientists from Politecnico di Torino and Istituto Superiore Mario Boella, Italy and Foundation of Research and Technology - Hellas, Greece, is published in the journal Optics Letters.