By combining two existing technologies, University of Bath physicists have developed a laser that targets the region from 3.1 to 3.2 µm. The mid-IR spectral band is useful for spectroscopy, remote sensing and hazardous material detection. One existing problem is that laser sources for this region are thin on the ground. 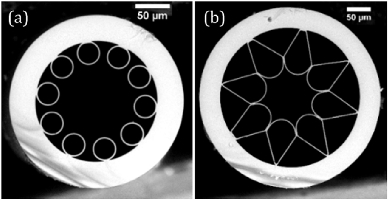 The team used a different hollow-core fiber design for the gain fiber (left) in the feedback fiber (right). “Beyond about 2.8 µm, conventional fiber lasers start to fall off in terms of power, and the other main technology for the mid-IR, quantum cascade lasers, doesn’t pick up until beyond 3.5 µm,” says William Wadsworth, who co-led the research team with Jonathan Knight, also at the University of Bath. “This has left a gap that has presented a great deal of difficulty.”

The new laser combines aspects of both gas and fiber lasers. Fiber lasers are useful because they tend to be stable and easy to use, produce high quality beams, can emit at high powers and are easy to cool. Placing a suitable gas inside of a hollow optical fiber allowed the researchers to create a fiber gas laser with mid-IR emission.

“You can think of the structures in our fibers as very long and thin bubbles of glass,” says Wadsworth. “By surrounding the region of space in the middle of the fiber with the bubbles, light that is reflected by the bubbles will be trapped inside of the hollow core.” Because light traveling inside a hollow-core fiber remains mostly in the empty core, these fibers overcome the tendency of silica-based glass to absorb light at wavelengths past 2.8 µm.

The researchers filled the fiber core with acetylene gas because it emits in the mid-IR and can be excited, or pumped, using lasers designed for the telecommunications industry. The Bath researchers (as well as other research groups) have previously shown that gas inside a fiber can interact with light to produce mid-IR emission. In the new work, the researchers added a feedback fiber, one of the last components needed to consider the device a true laser. The feedback fiber takes a small amount of light produced in the fiber containing the acetylene gas and uses that light to seed another cycle of light amplification, thus reducing the pump power required to produce a laser beam.

One advantage of the new design is its use of mature telecommunications diode lasers, which are practical, relatively inexpensive, and available in high powers. The researchers say they plan to use a higher power pump laser to increase the fiber gas laser’s power.

“We developed a way to use light to pump molecules and generate light that is not that common to see in a laser system,” says Fei Yu, a member of the research team. “This new way to construct a gas laser could be expanded to make more and more laser types that would have been impossible without our hollow-core fiber.”

The researchers say that a number of other gases should work with their fiber gas laser, allowing emission up to 5 mm. “This laser is just one use of our hollow-core fiber,” says Muhammad Rosdi Abu Hassan, a doctoral student and first author of the paper. “We see it stimulating other applications of the hollow fiber and new ways of interacting different types of laser beams with gases at various wavelengths, including wavelengths that you wouldn’t expect to work.”

Fei Yu helped develop the new hollow-core optical fiber. The long and thin bubbles of glass in the fiber reflect light into the fiber’s core in a similar way to how light reflects off the surface of a soap bubble, making it appear iridescent.

By posting a comment you confirm that you have read and accept our Posting Rules and Terms of Use.
Advertisement
RELATED ARTICLES
Hollow core fibers cut communication losses
Fiber-Based Lasers Use Molecular Gases to Produce Light
Sensor promises lower cost methane detection for the agricultural and oil and gas industries
Hollow core optical fibers outperform standard optical fibers
Fiber Optic Cables Are Everywhere: How Do They Work?
Advertisement