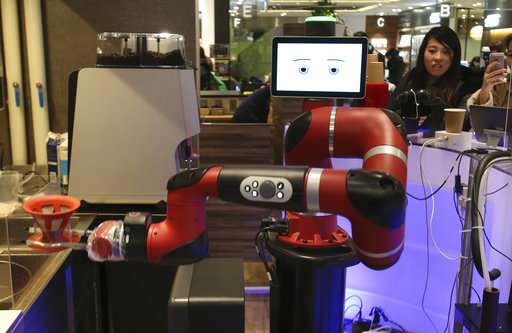 A robot barista named "Sawyer" makes a coffee at Henna Café in Tokyo on Friday, Feb. 2, 2018. The cafe's robot barista brews and serves coffee as the rapidly aging country seeks to adapt to shrinking workforce. Source: AP Photo/Koji SasaharaJoining an ever-growing list of robots capable of performing tasks such as bartending and cleaning homes is a robot barista capable of both brewing and serving coffee to customers in a Japanese cafe.

The one-armed robot — called Sawyer — debuted last week at Henna Café in Tokyo where it accepts vending machine tickets purchased by costumers. After scanning the ticket, the robot greets the customer and asks, “Would you care for a delicious coffee?"

By way of convincing the customer, the robot also adds, "I can make one better than human beings around here."

Capable of grinding, filtering and pouring coffee for up to five people at once, the robot can also operate an automated machine for six other beverages such as green tea latte, cappuccino and hot chocolate.

Serving a two-fold function of entertaining customers while increasing productivity, the café's operator, travel agency H.I.S. Co., says that only one person is necessary to oversee the entire café.

By posting a comment you confirm that you have read and accept our Posting Rules and Terms of Use.
Re: Robot Barista Debuts at Japanese Cafe
#1

This simply furthers numerous and organized efforts to demean and trivialize the dignity of human labor. I don't care to have conversation with a machine. I am perfectly willing to pay $5 for a latte in order that a fellow human being has a dignified, meaningful job. Yes, I'm one of the stalwart that avoids self-checkout whenever possible. Today it's your neighbor's job serving coffee and sandwiches. Tomorrow it's your job. Think about it.

Re: Robot Barista Debuts at Japanese Cafe
#2
In reply to #1
cold_fusion

Human labor that sneezes on your order, or simply gets it wrong. Robots taking over the world....that isn't going to happen. Same thing was assumed at Chrysler, Ford, Chevrolet when robots started doing work people should never do anyhow.