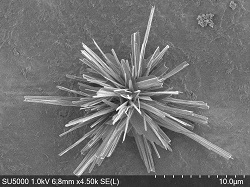 The novel process involves the electro-redeposition of copper from a sol–gel precursor. Copper was selected for the production of ethylene, the core component of polyethylene plastic. The international research team designed the catalyst and defined ideal conditions to maximize ethylene production while minimizing the methane output. Paired with carbon capture technology, this could lead to an incredibly green production mechanism for everyday plastics and sequestration of CO2.

In situ soft X-ray absorption spectroscopy was used to track the reduction of copper, revealing the ratio of copper species under different applied potentials.

The research is published in the journal Nature Catalysis.

By posting a comment you confirm that you have read and accept our Posting Rules and Terms of Use.
Advertisement
RELATED ARTICLES
Copper based electrode could produce fuel
Efficient Electrochemical Conversion of CO2 to Ethylene Achieved
A Greener Method to Create Plastic by Capturing CO2 Developed
Turning Pollution on Its Head
Selective Conversion of CO2 to Multi-Carbon Fuels
Advertisement