Turning Pollution on Its Head 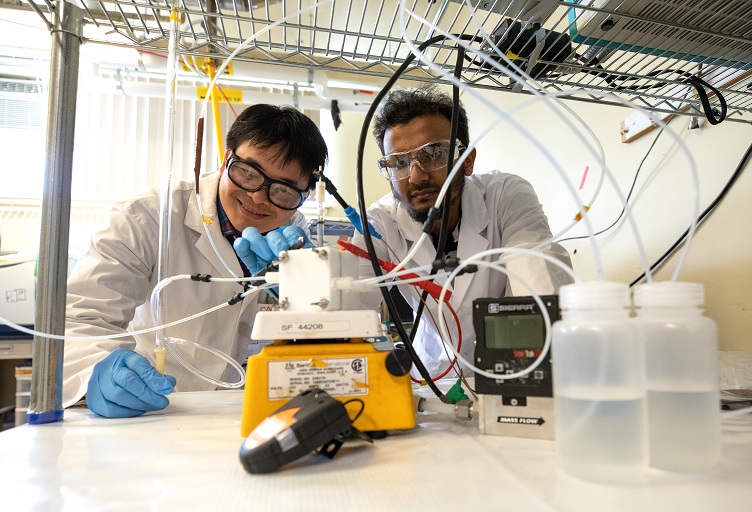 Demonstration of a catalyst for converting carbon dioxide into the building blocks for plastics. Source: Laura Pedersen.

A new technology from University of Toronto Engineering is set to turn one type of pollution on its head.

The production of plastics involves non-renewable fossil fuels, both as raw materials and as the source of power for the manufacturing process. It’s not an insignificant problem: The International Energy Agency estimates the production of the main precursors for plastics is responsible for 1.4 percent of global carbon dioxide emissions.

Plastics aren’t going away any time soon. But if CO2 produced by other industrial processes can be captured and, using renewable electricity, transformed into the common plastic precursor ethylene, carbon dioxide pollution can be used to make plastics — rather than the other way around.

What’s particularly ingenious about the approach, as envisioned by a team led by U of T Professor Ted Sargent, is the way it addresses a key challenge associated with carbon capture. Although the technology exists to filter and extract CO2 from flue gases, the resulting substance currently has little economic value that can offset the cost of capturing it. If, however, it can be transformed into a commercially viable product like ethylene, the incentive for companies to invest in carbon-capture technology increases.

A thin, copper-based catalyst was used to drive the conversion. According to Dr. Cao-Thang Dinh, the first author on a paper about the research published in the journal Science, the catalyst improved both energy efficiency and selectivity of the conversion to the highest levels ever recorded. By sandwiching the catalyst between layers of carbon and Teflon (polytetrafluoroethylene, or PTFE), the team was also able to address the challenge of keeping the catalyst stable in the high-pH environment typically used for conversions of this type.

The team’s system is currently capable of performing the conversion on a laboratory scale, producing several grams of ethylene at a time. The long-term goal is to scale the technology up to the point where it can convert the multiple metric tons of chemicals needed for commercial application.

"As a group, we are strongly motivated to develop technologies that help us realize the global challenge of a carbon-neutral future," Sargent said.

By posting a comment you confirm that you have read and accept our Posting Rules and Terms of Use.
Advertisement
RELATED ARTICLES
A Greener Method to Create Plastic by Capturing CO2 Developed
Researchers convert methane greenhouse gas into valuable chemicals
Selective Conversion of CO2 to Multi-Carbon Fuels
New Catalyst for Recycling Carbon Dioxide
Catalytic process upcycles polyethylene into propylene
Advertisement