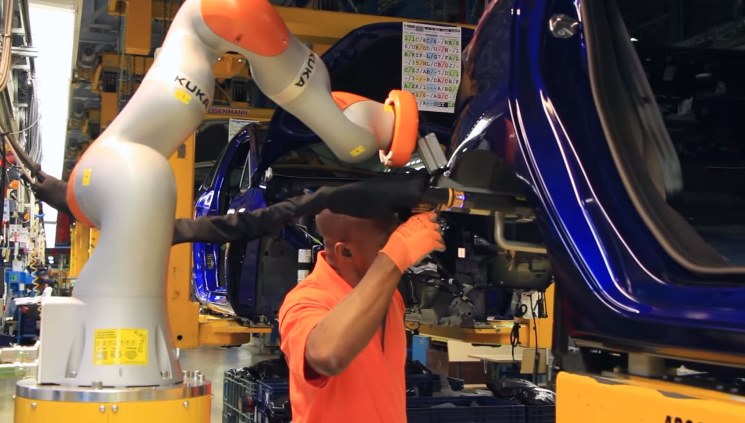 Ford Motor began using a cobot in July 2016 on its Fiesta production line.

For decades, large industrial robots have performed tasks within safety fencing or light curtains that separate the work cell from the rest of the plant. By the turn of the 21st century, robot manufacturers and startups began to break down these barriers with low-payload robots that occupy the same space as humans.

These user-friendly, easily programmable products came to be known as collaborative robots, or cobots. Denmark-based Universal Robots was one of the first to enter the market in 2008 with the lightweight and flexible UR5 robot arm that automated tasks up to 5 kg alongside people. That same year, robotics pioneer Rodney Brooks founded Rethink Robotics, whose flagship Baxter cobot handles low-volume, high-mix production jobs. Traditional industrial robot makers such as ABB, Fanuc and Kuka soon followed suit. The resulting influx of cobots created a new sector in industrial automation, one that challenged the philosophy that contact between a human and an operational robot should never happen.

(Learn more about industrial robots with the Engineering360 product and supplier guide.)

“There was a lack of guidance in this fast-developing field regarding how collaborative robots should be built and integrated in a safe way,” says Jean-Philippe Jobin, chief technology officer of Robotiq, a manufacturer of gripping and sensing technology.

That guidance arrived in early 2016 with the publication of ISO/TS 15066, the technical specification from the International Organization for Standardization that identifies safety requirements for collaborative industrial robot systems and the environments in which they operate.

ISO/TS 15066 supplements the existing industrial robot safety standards ISO 10218-1 and ISO 10218-2. Published in 2011, these standards list safety requirements for collaborative robot applications, but in relatively general terms because the technology was still new.

ISO/TS 15066 is based on the idea that if a human has incidental contact with a robot system, pain or injury should not occur. As such, one provision in the specification is that the risk assessment required for power and force limiting (PFL) collaborative robots — in which the force a robot exerts on its environment is limited — must incorporate data on pain threshold levels. 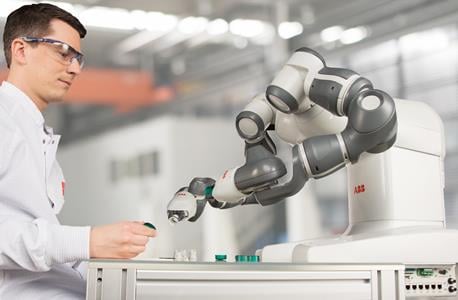 The YuMi cobot includes extra padding to protect humans from serious injury during chance encounters.To establish this data, the University of Mainz in Germany conducted a pain onset study on 100 volunteers that instituted force and pressure limits on 29 areas of the body. Prior to the project, these threshold values were only available from literature studies and random laboratory tests. The study produced quasi-static force and pressure limits for the human pain threshold that were incorporated into ISO/TS 15066.

Manufacturers of PFL cobots design the units to be “inherently safe.” This is accomplished through the robot’s software and hardware, says Hui Zhang, head of product management for ABB Robotics. “Should a contact situation happen between the robot and person, the control system will monitor and limit power, force and speed.”

ABB’s cobot, called YuMi, has a mechanical design that enables it to work alongside people. The lightweight design handles a payload of 500 g, and padding around YuMi’s arms provide extra precaution against possible impact with a human.

Even with cobots’ built-in safety systems, ISO/TS 15066 requires that robot integrators perform a comprehensive risk assessment that evaluates the robot system and the environment in which it is placed.

That’s because virtually every cobot installation is unique, says Carole Franklin, director of standards development for the Robotic Industries Association. “You can have the same robot arm but it can have many different end effectors and combinations of safeguarding equipment,” Franklin says. “It’s the responsibility of the integrator to identify risks of the installation and propose ways to mitigate them.”

According to Robotiq’s Jobin, mitigation techniques could include anything from reducing the speed of the robot to adding covers that protect workers from sharp edges. The goal is to validate that not only the robot but the complete work cell is safe “because the risk can come from being crushed between the gripper and table or being trapped within the robot arm and so on,” Jobin says.

Jobin also says that a risk assessment is necessary anytime a collaborative robot work cell changes the type of tasks it performs.

Worker safety played a critical role when Ford Motor Co. launched its first trial of cobots in assembly in July 2016. The cobots, developed in partnership with robot manufacturer KUKA Roboter GmbH, help workers fit shock absorbers to Fiesta cars. Specifically, workers use the robot to lift and automatically position the shock absorber into the wheel arch before pushing a button to complete installation.

As part of the design consultation process, Ford sought feedback from more than 1,000 production-line workers to identify tasks for which the new robots would best be suited. During the two-year robot development program, “we learned many differences between conventional automation manufacturing techniques and new types of semi-automation where the operator and a robot work hand-in-hand together,” says Anton.

To ensure a safe working environment for employees collaborating with the robots, Ford engineers carried out what Anton calls “a series of intensive tests” in partnership with KUKA robot experts and safety professionals and authorities. As part of this process, Ford’s safety team also carried out risk assessments to ensure the workstation meets strict ISO regulations, CE certifications and other necessary ergonomic and industry safety constraints.

As the first edition of a new technical specification, ISO/TS 15066 will likely continue to undergo improvements based on input from robot integrators, automation engineers and production managers who use the document. The content of the standard will be rolled into the primary international standard for industrial robot safety, ISO 10218, when it is next revised.

Robotiq’s Jobin expects that researchers will develop more accurate pain threshold values and help the Industry better understand the relationship between force, pressure and injury. Additionally, he acknowledges that the technical specification “is still a little bit complex.”

“Either you follow the chart of force/pressure threshold values, which are somewhat low, or you can conduct your own test and do the math,” Jobin says. “A lot of people don’t have the skills to do that.”

From the end user’s perspective, “the only thing they want to know is whether the collaborative robot will be safe or unsafe,” Jobin says. “We cannot answer that question yes or no, unfortunately, because there can be a lot of gray zone.”

That makes it critical for robot engineers and integrators to identify and evaluate each risk for their customers and, if a barrier to safety exists, determine whether the risk is acceptable. “Bottom-line, industries that install collaborative robots don’t want to hurt their employees by doing so,” Jobin says.