McGill University researchers have chemically imprinted polymer particles with DNA strands — a technique that could lead to new materials for applications ranging from biomedicine to the promising field of soft robotics.

In a study published in Nature Chemistry, the researchers describe a method to create asymmetrical polymer particles that bind together in a spatially defined manner, the way that atoms come together to make molecules.

Although polymers are used in everything from clothing and food packaging to 3D printing and electronics, most self-assembled polymer structures have been limited to symmetrical forms such as spherical or cylindrical shapes. Recently, however, scientists have focused on creating non-symmetrical polymer structures — for example, "Janus" particles with two different "faces" — and they are starting to discover exciting new applications for these materials. One example is robotics made with soft, flexible structures that can change shape in response to external stimuli.

The method described in the paper "introduces a programmable level of organization that is currently difficult to attain in polymer chemistry," said McGill chemistry professor Hanadi Sleiman, senior author of the study. "Chemically copying the information contained in DNA nanostructures offers a powerful solution to the problem of size, shape and directional control for polymeric materials." 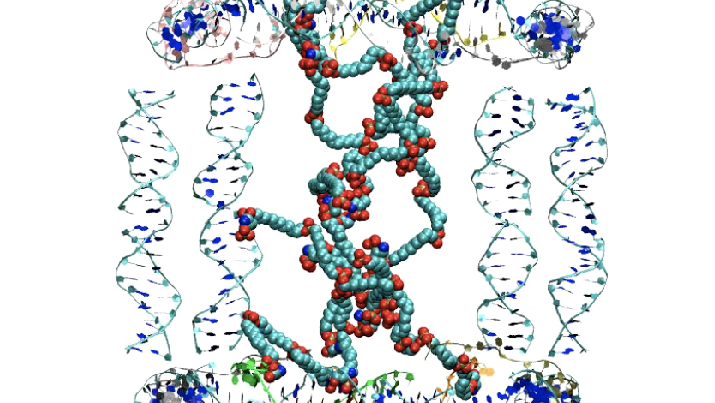 Computer simulation of polymer chains associating together and folding inside the DNA cage. Source: The Li Research Group/University of Vermont.Using DNA cages as molds

The new study builds on a technique developed in 2013 by Sleiman's research group to make nanoscale "cages" from strands of DNA, and stuff them with lipid-like polymer chains that fold together into a ball-shaped particle that can contain cargo such as drug molecules.

To take that nano-engineering feat a step further, Sleiman and her Ph.D student Tuan Trinh teamed up with colleagues at the University of Vermont and Texas A&M University at Qatar. Together, the researchers developed a method to imprint the polymer ball with DNA strands arranged in pre-designed orientations. The cages can then be undone, leaving behind DNA-imprinted polymer particles capable of self-assembling — much like DNA itself — in pre-designed patterns. Because the DNA cages are used as a mold to build the polymer particle, the particle size and number of molecular units in the polymer can be precisely controlled, according to Sleiman.

The asymmetrical polymer structures could be used eventually in a range of applications, the researchers say. One potential example — multi-compartment polymer particles, with each compartment encapsulating a different drug that could be delivered using different stimuli at different times. Another possibility is an asymmetric porous membranes that can direct molecules along separate, specific paths.

By posting a comment you confirm that you have read and accept our Posting Rules and Terms of Use.
Advertisement
RELATED ARTICLES
Breakthrough Technique for Building Optical Metamaterials
A Clearer Picture for 'DNA Origami'
DNA Origami Surpasses Important Steps to Success
A "bubbly" solution for detecting COVID-19
'Origami Nanofactories' May Soon Be Delivering Medicine to Patients
Advertisement