The double strands of genes are what make them so strong. With a technique called DNA origami, biophysicist Hendrik Dietz has been building nanometer-scale objects for several years at the Technical University of Munich (TUM). Now Dietz and his team have not only broken out of the nanometer realm to build larger objects, they have also cut the production costs a thousand-fold. These innovations open a whole new frontier for the technology.

Viruses encapsulate their genetic material in a shell comprising a series of identical protein building blocks. The hepatitis B virus capsule compromises 180 subunits, a typical case of “prefabricated” construction deployed frequently in nature. 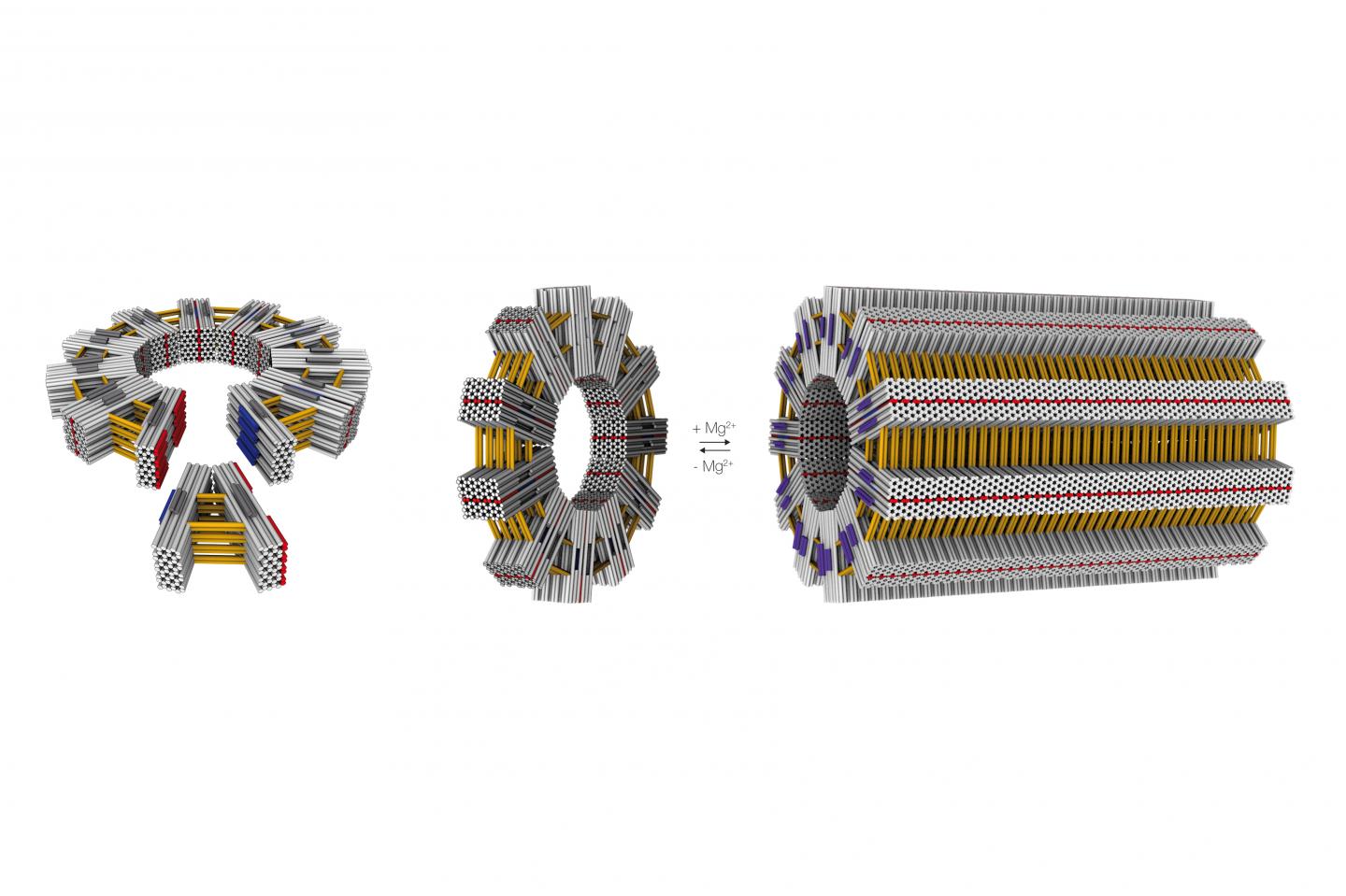 In a first step, scientists at the Technical University of Munich form V-shaped building blocks using DNA-origami techniques. Determined by the opening angle, a defined number of building blocks self-assemble into a gear-wheel. In a third step, these gear-wheels form tubes with sizes of virus-capsids. Source: Hedrik Deitz/TUM

The team led by Dietz, Professor of Biomolecular Nanotechnology at the TU Munich, has now transferred viral construction principles to DNA origami technology. This allows them to design and build structures on the scale of viruses and cell organelles.

The technology builds on a long single strand that is appended to a double-stranded structure using short staple sequences.

"The double-stranded structure is energetically sufficiently stable so that we can force the single strand into almost any shape using appropriately chosen counterparts," explains Hendrik Dietz. "This way we can precisely design objects in the computer that are merely a few nanometers in size."

The Dietz lab commands techniques that allow them to further modify and insert chemical functionalities into objects by adding side groups. But, until now, the size of the objects remained in the nanometer realm.

To this end, they first created V-shaped nano-objects. These have shape-complementary binding sites on their sides, allowing them to autonomously attach to each other while floating in a solution. Depending on the opening angle, they form “gears” with a controlled number of spokes.

"We were thrilled to observe that, almost without exception, rings formed as defined by the opening angle," says Dietz. "Decisive for the ability to build objects of this size and complexity is the precision and rigidity of the individual building blocks. We had to reinforce individual elements with crossbars, for instance."

To further exploit the construction principle, the team created new building blocks that had “glue joints” not only on the side but also slightly weaker ones on the top and bottom. This allows the “nano-gears” to form long tubes using the additional docking sites in a second step.

"At lengths of one micrometer and a diameter of several hundred nanometers, these tubes have reached the size of some bacteria," explains Dietz. "And we can use the architecture of individual elements to determine features of the overall structure."

Inspired by the symmetries and the hierarchical design of viruses, the researcher also attempted to build closed cage structures.

"A potential future application of artificial cages is the transport of medication in the body," explains Dietz. "Here, the goal is to release active agents only at specific desired locations, sparing the rest of the body."

Using the principles already applied to the structures described before, the team now constructed new elements they hoped would assemble in a self-limiting fashion into cage structures under the correct conditions. According to these strategies, a triangular middle section and three V-shaped elements give rise to a three-pronged building element.

Depending on the opening angle of the V, a defined number of these units merge to form tetrahedral, hexahedral or dodecahedral structures in a second step. The final structures integrate up to 1.8 million addressable DNA-based pairs at user-defined positions. For the first time, the discrete-size cages attain molecular weights and sizes comparable to that of viruses and small cell organelles.

To date, the manufacturing processes have limited scope of application to those only requiring a small amount of a material. Manufacturing a few micrograms of material with conventional methods precludes many potential medical and materials science applications.

The bottleneck is short staple strands that must be chemically produced base by base. The main strand obtained from bacteriophages can be produced on a large scale using biotechnological processes.

The team refined so-called DNA enzymes, a discovery that is stemming from synthetic biotechnology. These DNA strands break apart at specific positions when they were exposed to a high concentration of zinc ions.

They joined the short and staple sequences to a long strand using two modified DNA enzymes each.

"Once precisely assembled with a specific base sequence, these combined strands can be reproduced in a biotechnological process, as with single strands of bacteriophage DNA," says Dietz, explaining the key feature of the process.

The main strand and the second strand, comprising DNA enzymes and staple sequences, were successfully produced using a high cell density process with bacteria. The process is scalable and therefore amenable to high volume production of the main strands and staples. Increasing the zinc ion concentration after DNA isolation released the short staple sequences.

Investigations of the reaction mechanisms in collaboration with colleagues at the Institute of Biochemical Engineering showed that this is possible, even on a large scale. At the TUM Research Center for Industrial Biotechnology in Garching, scientists have now produced multiple grams of four different DNA origami objects. Scaling up the process to a cubic meter scale is now within grasp.

"The interplay of biotechnology and process technology has thus enabled setting a truly fundamental milestone on the path to future applications in DNA nanotechnology," says Professor Dirk Weuster-Botz, Chair of the Institute of Biochemical Engineering.

The paper on this research was published in Nature.

By posting a comment you confirm that you have read and accept our Posting Rules and Terms of Use.
Advertisement
RELATED ARTICLES
'Origami Nanofactories' May Soon Be Delivering Medicine to Patients
Watch: Painting the Mona Lisa with DNA
A Clearer Picture for 'DNA Origami'
Using DNA Strands in Polymer Nanoparticle Design
DNA ‘Smart Glue’ May Help Build 3D Tissues, Organs
Advertisement