A Clearer Picture for 'DNA Origami' 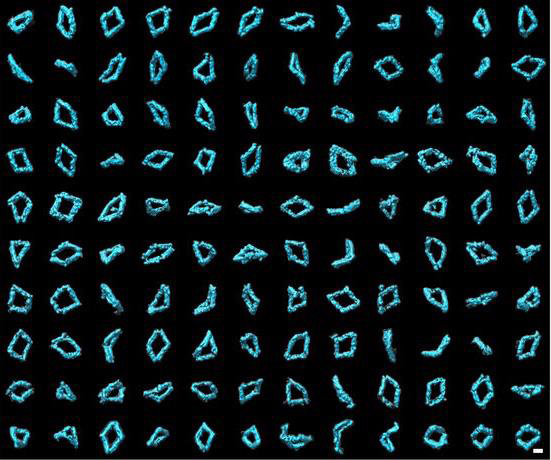 Individual-particle electron tomography (IPET) images. Source: Lawrence Berkeley National LaboratoryThe concept of "DNA origami" is something researchers have been working on over the past decade – using DNA as building blocks to create nanoscale materials that can be folded into specific shapes.

These shapes could act as molecular devices for delivering drugs, marking medical images or performing biological research. They would also have applications as electronic device components.

The origami structures have thus far been limited, however, by the difficulty of manufacturing and manipulating long "scaffold" strands that would each be composed of more than 10,000 DNA structural units. It also has proved difficult to study the nanoparticles' structure, which is made up of molecules each having a unique 3D shape, in its flexible and delicate natural state. Conventional imaging methods like single-particle cryo-electron microscopy (cryo-EM) — which rely on computer averaging from thousands to hundreds of thousands of similar molecules — are unsuitable to provide a complete structural picture, as structural information is easily averaged away.

But researchers from Lawrence Berkeley National Lab (Berkeley Lab) and Ohio State University (OSU) have generated 3D images from 129 individual molecules of flexible DNA origami particles, providing the first experimental verification of the DNA origami model. Each of the captured 3D images has a resolution of 6 to 14 nanometers, enabling researchers to tease out information about the dynamics and flexibility of DNA origami structures.

The researchers relied on individual-particle electron tomography (IPET), a technique developed at Berkeley Lab's Molecular Foundry, to image individual molecules. IPET takes pictures of a target molecule from multiple viewing angles, and then combines these pictures to create one 3D, whole-molecule rendering. A similar process is used by medical computed tomography (CT) scanning.

The researchers' methods could easily be applied to other types of fabricated DNA origami structures, helping to inform future structure design and optimization.

Their work was recently published in Nature Communications.

By posting a comment you confirm that you have read and accept our Posting Rules and Terms of Use.
Advertisement
RELATED ARTICLES
Watch: Painting the Mona Lisa with DNA
'Origami Nanofactories' May Soon Be Delivering Medicine to Patients
DNA Origami Surpasses Important Steps to Success
New Propulsion Technology for Nanorobots in 'Nanofactories'
Microfluidic System Performs Early Genetic Profiling of Cancer
Advertisement