Watch: Synthesizing Silk for Medical Use

Spider silk is a material of interest for a large number of biomedical applications, and technology has been 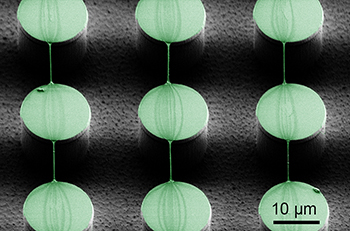 Silk threads created by the new process. Source: KTH Royal Institute of Technologydeveloped to produce synthetic silk proteins that mimic those of silkworms or spiders. However, the manufacturing process of these structures is complex and involves post-treatment with chemicals unsuitable for biological applications.

A new synthesis approach devised at Sweden’s KTH Royal Institute of Technology eliminates the need for harsh chemicals that ruin the bioactive properties of silk proteins.

Silk protein droplets are placed on a hydrophobic surface composed of micro-sized silicon pillars. Nanowires are formed by dragging the material over the pillars, leaving strands of silk in the droplet’s trail. Leaving a droplet to evaporate on top of the surface results in sheet formation. Two types of silk proteins were designed–one with an affinity to antibodies and another with cell binding properties.

The nanowires could be used in cancer therapy. Coatings can also be formed for application in biomarker detection, and silk sheets can be fabricated for use as cell growth scaffolds.

By posting a comment you confirm that you have read and accept our Posting Rules and Terms of Use.
Re: Watch: Synthesizing Silk for Medical Use
#1