A team of researchers from Tufts University has developed silk-based materials that do not stick to water.

According to its developers, the modified silk can be molded into forms like plastic or coated onto surfaces as a film. The material’s non-stick properties reportedly outperform the nonstick surfaces found on some brands of cookware. 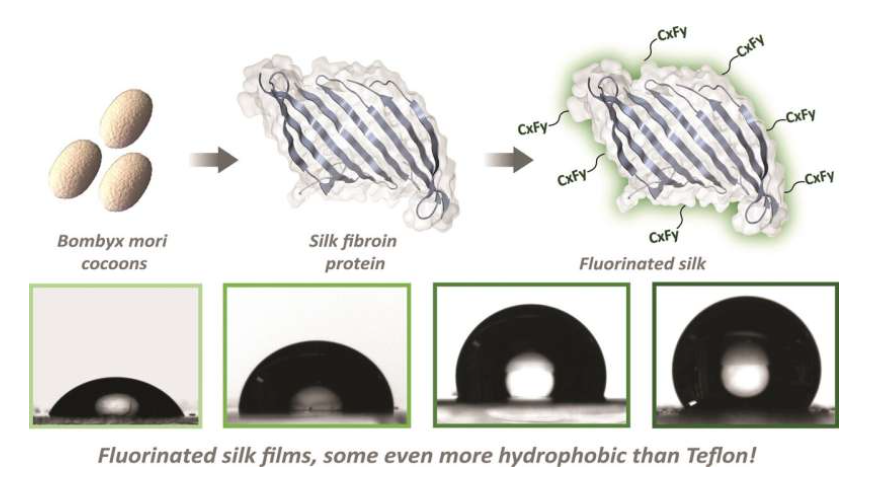 To develop the water repellant silk surfaces, the Tufts’ team modified silk fibroin to repel water by covering the surface of this material with short chemical chains dubbed perfluorocarbons, which feature both carbon and fluorine. The perfluorocarbons chains are considered extremely stable and do not react with other chemicals, proteins or biological chemicals in the body, the researchers reported.

Typically, the surface of silk protein behaves like a magnet to water, featuring both negatively and positively charged branches on the silk attracting water. Yet, the silk protein surface coated with perfluorocarbons eliminates those so-called branches, leaving little for the water to grab on to.

The researchers suggest that other substances will also easily roll off of the modified silk beyond water, including some foods, blood, cells, tissues and oils.

Beyond medical applications, the Tufts team is eyeing the modified silk for other use cases including automotive windshields, metal coatings for preventing corrosion or non-stick fabrics.

"The success we had with modifying silk to repel water extends our successes with chemically modifying silk for other functionalities — such as the ability to change color, conduct electrical charge, or persist or degrade in a biological environment," said David Kaplan, professor of engineering at Tufts. "As a protein, silk lends itself well to modular chemistry — the ability to 'plug in' different functional components on a natural scaffold."

The study detailing the advance, Towards Non‐stick Silk: Tuning the Hydrophobicity of Silk Fibroin Protein, was published in the journal ChemBioChem.

By posting a comment you confirm that you have read and accept our Posting Rules and Terms of Use.
Advertisement
RELATED ARTICLES
Silk Preserves Fruit Without Refrigeration
Programmable Material Made from Silk Protein
"Dragon Silk" Ready for Spool-up
Underwater adhesive inspired by mussels, barnacles
Startup using discarded silkworm casings as alternative to harmful chemicals in the manufacturing of clothing
Advertisement