Shale gas production in the Appalachia region has increased rapidly since 2012, driving an overall increase in U.S. natural gas production.

According to a drilling productivity report from the Energy Information Administration (EIA), natural gas production in the Marcellus and Utica shale plays has increased by more than 14 billion cubic feet per day (Bcf/d) since 2012. 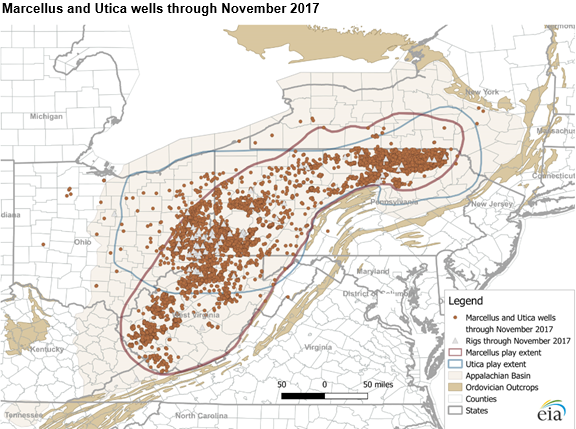 EIA attributes this increase to efficiency improvements in horizontal drilling and hydraulic fracturing in the region, which include faster drilling, longer laterals, advancements in technology and better targeting of wells.

In November, China Energy Investment Corp. said it plans to invest $83.7 billion over the next 20 years in shale gas development and chemical manufacturing projects in West Virginia.

China Energy has made several trips to West Virginia, and the agreement marks the first step in a series of commitments China Energy plans to make there. 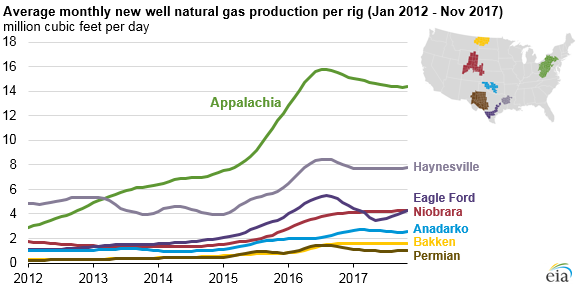 Production has surged in the basins since 2012. Credit: EIAThe projects will focus on power generation, chemical manufacturing and underground storage of natural gas liquids and derivatives.

The Marcellus shale extends from New York to Kentucky and Tennessee and is the most productive natural gas-producing formation in the Appalachian Basin, EIA says. The formation's footprint covers about 95,000 square miles. Dry natural gas wells in the Marcellus are mostly located in the eastern portion of the play and liquids-rich wells are typically located in the western portion.

By posting a comment you confirm that you have read and accept our Posting Rules and Terms of Use.
Advertisement
RELATED ARTICLES
China Energy Eyes Marcellus with $83B Investment Pledge
These Projects Could Halt the GOM's Production Decline
These 3 Basins Are Driving U.S. Natural Gas Production Growth
U.S. a Net Natural Gas Exporter in 2017, a First Since Sputnik
U.S. Energy Growth and Dominance May Be Solid for Decades
Advertisement