A proof-of-concept paper was published in the journal Nature Communications by lead author Lance Wheeler, an NREL scientist, and seven other NREL researchers. The team relied on advanced materials like perovskites and single-walled carbon nanotubes to develop the window, which responds to heat by transforming from transparent to tinted. The material generates electricity as it darkens. 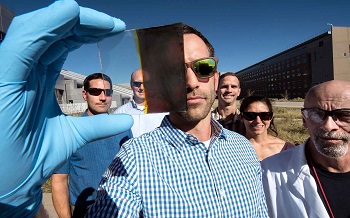 Lance Wheeler and the NREL team that developed the smart window. Source: NRELThis tinting is due to methylamine molecules that are reversibly absorbed into the window. When sunlight heats the window, the molecules are driven out and tinting occurs. In the absence of sunlight, the device cools down, the molecules re-absorb into the material, and the window turns transparent again.

The NREL window allows an average of 68 percent of light in the visible portion of the solar spectrum to pass through while in a transparent state. When the window changes color only 3 percent is allowed through the window. Existing solar window technologies are static, which means they are designed to harness a fraction of the sunlight without sacrificing too much visible light transmission needed for viewing or the comfort of building occupants.

The window designed by NREL exhibited a solar power conversion efficiency of 11.3 percent.

“There are thermochromic technologies out there but nothing that actually converts that energy into electricity,” Wheeler said. He went on to say the technology could be integrated into vehicles, buildings and other applications.