Wind turbines in the United States have grown in both average height and generating capacity over the past decade, according to the Energy Department’s Energy Information Administration (EIA).

Wind turbine capacity is based largely on blade length, and taller turbines are able to have longer blades and access to better wind resources at greater heights. 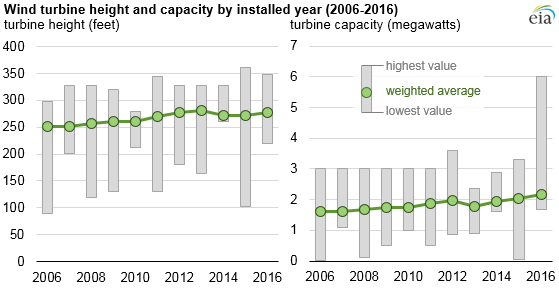 Hub height and turbine capacity have increased. Source: EIAWind turbines accounted for 8 percent of the operating electric generating capacity in the United States in 2016, surpassing hydropower as the renewable technology with the largest installed generating capacity.

However, because of the way wind and hydropower electricity generators operate, hydropower still provides more electricity than wind does, totaling six and seven percent of the U.S. total, respectively, in 2016.

(Click to enlarge.) Capacity growth is a function of blade length. Source: NRELEIA says that the largest onshore turbines in the United States are in Texas, with capacities of 4 megawatts each. One of the world's largest wind farms is also in Texas — the Horse Hollow Wind Energy Center has 420 wind turbines spread over about 47,000 acres. The project has a combined electricity generating capacity of about 735 megawatts.

Since 2012, the average height of wind turbines installed in the United States has been about 280 feet, or 80 meters. Before 2006, few wind turbines were as tall as 280 feet.

Wind speed typically increases with altitude and increases over open areas without windbreaks such as trees or buildings. Favorable sites for wind turbines include the tops of smooth, rounded hills, open plains and water, and mountain gaps that funnel and intensify wind.

In 2016, 40 states had utility-scale wind power projects, with the most generation in Texas, Iowa, Oklahoma, California and Kansas, according to the EIA. Combined, these five states produced about 55 percent of total U.S. wind electricity generation. Additional detailed information about wind turbine heights, capacity and other characteristics is available in EIA’s recently released annual survey of utility-scale electricity generators.

In fact they have grown more than that, 7 and 8 megawatt capacity turbines have already been installed, 8 and 9.5 are being manufactured for installations or final agreements for same, - some of these models, if for higher wind speed sites, can be available with 10 meg generators, these bigger turbines are installed on higher towers, to look at the perspective, the cost of these monsters fell, from three years ago, to the middle of this year, 36%, it is claimed. However, to look at the factual dynamics, every 10% increase in Diameter, (not much extra in blade length in context) doubles the swept area, therefore the potential power of the turbine, - Plus every 1 metre increase in Tower height gives 1% (rule of thumb), increase in measured power (compounded) so it is not surprising that wind farms are saying that a 2 megawatt turbine does not produce twice as much as a 1 megawatt turbine, but more like 4 times as much, and as these graceful beauties loft higher and higher, the wind becomes not just faster, but more stable, and more continuous, as the resistance of the terrain below becomes not only less, but less important.

Meanwhile the technology is developing in leaps and bounds, reducing costs, reducing maintenance and downtimes, increasing electronic control capabilities and measurement, and currently not facing any major obstacle to getting bigger and bigger, cheaper and cheaper, better and better. - Watch out Nuclear, your time has gone.