Detection of leaks in water supply networks is an arduous, time-consuming task requiring disassembly and inspection of pipes. University of Washington researchers have devised a simpler solution by putting their ideas to paper. Literally. 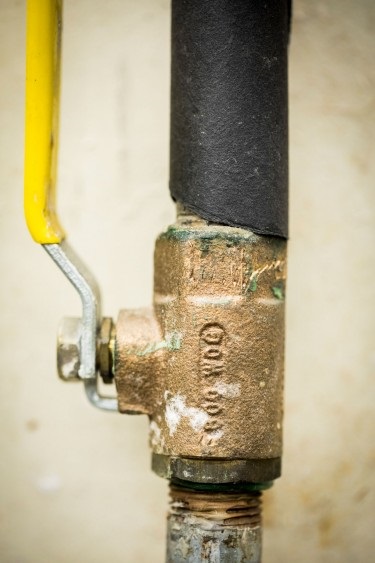 The black paper could be wrapped around a pipe, as shown in this example, to detect leaks. (Source: Mark Stone/University of Washington)an LED light or alarm system. The researchers processed wood fibers and added nanomaterials by a standard method for papermaking.

When water droplets accidentally fell onto the paper, the LED light that indicated conductivity switched off. Instead of ruining the paper, as first thought, the team realized they had created a water-sensing paper. Fibrous cells in the material swell in the presence of water, resulting in displacement of the embedded conductive nanomaterials. This breaks the electrical connection and causes the indicator light to turn off. As the paper dries, the conductive network re-forms so the paper can be used multiple times.

A sheet of conductive paper with a battery could be placed around a pipe or under a complex network of intersecting pipes in a manufacturing plant. If a leak occurs, the paper would sense the presence of water and send an electrical signal wirelessly to a central control center so a technician could quickly locate and repair the leak.

The material is also sensitive enough to detect trace amounts of water in mixtures of various liquids, a property of value for the petroleum and biofuel industries, where water is regarded as an impurity.