King Abdullah University of Science and Technology (KAUST) researchers have developed a new method to make triple-layered, hollow nanostructures for hybrid materials which have been particularly difficult to develop. Hybrid materials are created by combining multiple nanomaterials into a single structure. The hybrid materials must have the best properties of each component and should outperform the materials on their own. 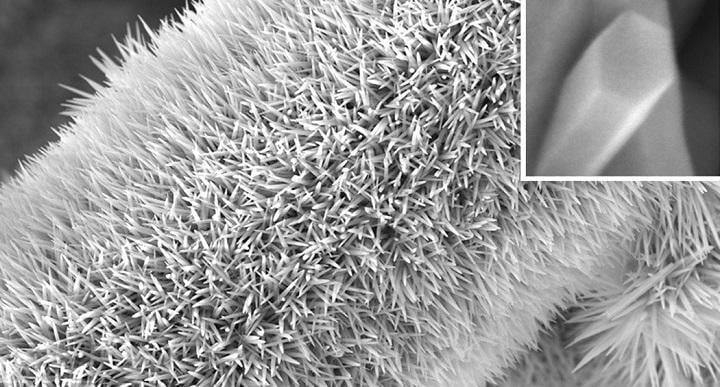 A carbon fiber covered with a spiky forest of NiCoHC nanowires. (Source: KAUST)

The new hybrid structures are typically made of the conductive organic core between two layers of electro-catalytically active materials. These materials could be used for anything as small as better batteries or as big as renewable energy.

The KAUST team created a new dual template approach to create the triple-layered nanostructures. To develop the newest nanomaterial, the researchers grew it directly onto carbon paper. A forest of nickel-cobalt hydroxyl carbonate (NiCoHC) was first developed on the carbon paper. Each of these bristles is then coated with an organic layer of hydrogen-substituted graphdiyne (HsGDY). The chemical mixture is then reacted with an inner NICoHC and HsGDY partial barrier. Some nickel and cobalt ions diffused outward and reacted with the thiomolybdate that is in the solution surrounding the material. This reaction forms an outer nickel-cobalt-co-doped molybdenum disulfide (MoS2) layer.

On the other side, some of the sulfur ions in the added chemicals were diffused inwards. These ions then react with the remaining nickel (Ni) and cobalt (Co). This results in a substance that has a structure of Co9S8, Ni3S2@HsGDY@Ni, Co-MoS2. This structure is a conductive organic HsGDY layer that is sandwiched between two inorganic layers.

The new triple-layer material was tested by the KAUST team. The new material was successful at electro-catalytically breaking up water molecules for hydrogen material in creating renewable fuel.

"These triple-layered nanostructures hold great potential in energy conversion and storage," says Sifei Zhuo, a postdoctoral member of study leader Peng Wang’s team. "We believe it could be extended to serve as a promising electrode in many electrochemical applications, such as in supercapacitors and sodium-/lithium-ion batteries, and for use in water desalination."

The study on the new material was published in Nature Communications.