As unlikely as it seems, spiders can boost your hearing by improving the quality of hearing aids and related 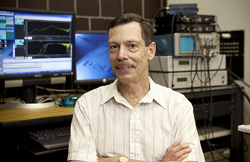 Use of the silk should lead to the development of better microphones for hearing aids compared with conventional pressure-based systems. Spider silk detects the velocity of the air instead of the pressure of the air.

For someone with a hearing aid, this means being able to cancel out background noise when having a conversation in a crowded or noisy area. The same concept could be applied to the microphone inside cell phones, and any fiber that is thin enough could be used in the same way.

Spider silk is thin enough that it also can move with the air when hit by soundwaves. “This can even happen with infrasound at frequencies as low as 3 hertz,” said Miles. Sound at that frequency is typically inaccessible. It’d be equivalent to hearing the tectonic plates moving in an earthquake.

Re: Better Hearing with Spider Silk
#1

I'm there, now. My hearing is nill above 8 kHz without aids. Mine cost $8k three years ago and insurance paid only 1/2.

I never go anywhere or drive without them.

Re: Better Hearing with Spider Silk
#2