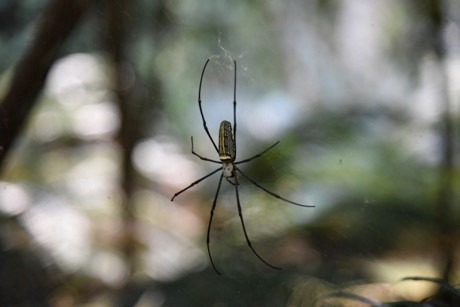 How does a spider descend down a web without spiraling out of control?

Researchers from China and the U.K. set out to find why spider silk is unlike human hair or metal wires or even synthetic fibers.

"Spider silk is very different from other, more conventional materials," says Dabiao Liu of Huazhong University of Science and Technology. "We find that the dragline from the web hardly twists, so we want to know why."

Why do they want to know? Because the resistant spinning could lead to biomimetic fibers that mimic these properties for potentially multiple uses such as violin strings, helicopter rescue ladders and parachute cords.

"If we understood how spider silk achieves this, then maybe we could incorporate the properties into our own synthetic ropes," says David Dunstan of Queen Mary University of London.

Researchers collected strands of silk from captive spiders and suspended the strands inside a cylinder using two washers at the end to mimic a spider. The cylinder isolated the silk from the environment and kept it at a constant humidity because water can cause the fibers to contract.

A high speed camera then recorded the silk’s back and forth oscillations over hundreds of cycles. Spider silk deforms slightly when twisted, then releases more than 75 percent of its potential energy as the oscillations rapidly slow. After twisting, the silk partially snaps back.

Researchers believe this behavior is linked to the silk’s complex physical structure, consisting of a core of multiple fibrils inside a skin. These fibrils have segments of amino acids in organized sheets and others in unstructured looping chains. The team believes the silk stretches like elastic and warps the hydrogen bonds linking like chains, which deforms like plastic.

The next steps of research include investigating how the silks twist in this way and researchers are looking at how it maintains its stiffness during torsion, what effect humidity has and to what degree air helps dissipate the energy.

The full research can be found in the journal Applied Physics Letters.

Re: What Makes Spiders Descend Gracefully?
#1