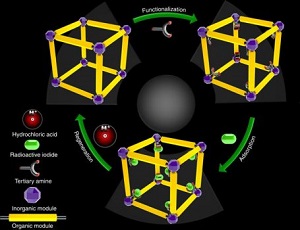 The MOF was engineered at Rutgers University, analyzed by computational physicists from Wake Forest University. Its performance was measured in experiments conducted at University of Texas-Dallas.

The MOF is three to four times more effective at radionuclide capture than the current industrial adsorbent used by nuclear power plants. It’s also cheaper, because it doesn’t rely on a precious metal such as silver to form its corners. The new adsorbent can also be recycled multiple times without loss of capacity.