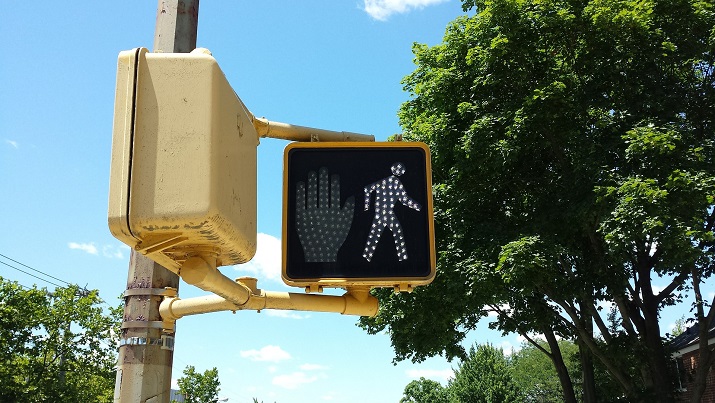 Image credit: CC0 Creative Commons.Traffic signals will soon be getting smarter, and that’s good news for those with disabilities.

A two-year project begun by researchers at Carnegie Mellon University's National Robotics Engineering Center aims to develop a system for relaying information from a user’s smartphone to traffic signals – which can then adjust their timing, giving pedestrians with visual or other disabilities more time to make a safe crossing.

"The smartphone can learn how fast the pedestrian moves, or if the user might have difficulty at certain intersections," explains robotics professor Stephen Smith. "The intersection could extend the green in real time… and it might monitor the phone's location so that it notices if (the pedestrian) starts moving outside of the crosswalk."

Smith previously led the development of the Surtrac system of smart signals, which uses artificial intelligence to monitor traffic. Surtrac enables signals to alter their timing and maximize the number of cars that can pass through an intersection, eliminating the need for unnecessary idling at a stop light when no cross traffic is present. In Pittsburgh, Pennsylvania, the system has shown an ability to reduce travel time by 25 percent, braking by 30 percent and idling by more than 40 percent.

Development of the new pedestrian system initially will involve a set of existing smart signals near the Carnegie Library for the Blind and Physically Handicapped, in Pittsburgh. Two additional intersections will subsequently be equipped with smart signals to connect the system with the Western Pennsylvania School for Blind Children in Oakland.

Smith said he anticipates yearly field tests of the system on people with visual disabilities; once developed, it also should work for people with other types of disabilities. Eventually, it might be used by pedestrians of all abilities – such as in suburban areas, where signals are not timed to accommodate the infrequent street-crosser.

In order to communicate with the traffic signals, smartphones will need to be equipped with dedicated short range communications (DSRC) radios. For the study, a DSRC sleeve can be fitted to existing smartphones.

The project is largely sponsored by a $2 million grant from the Federal Highway Administration.

By posting a comment you confirm that you have read and accept our Posting Rules and Terms of Use.
Advertisement
RELATED ARTICLES
Tweaking traffic lights during snowstorms can ease snarls
Toronto to Test Smart Traffic Signals to Ease Congestion
Pedestrian Safety Is Focus of NTSB Traffic Safety Report
Watch: Using AI to Alleviate Traffic Accidents
Test Track for Autonomous Vehicles Opens in Michigan
Advertisement