Since the debut of penicillin 70 years ago, antibiotics have justifiably established their reputation as a true miracle drug, curing hundreds of millions worldwide from bacterial infections that once amounted to a death sentence.

Over the years, however, the efficacy of these therapeutic marvels has eroded as a result of antibiotic-resistant bacteria. It’s a problem that has prompted increasing concern among public health authorities.

The U.S. Centers for Disease Control (CDC) estimates that two million people are infected with drug resistant bacteria nationwide every year. A 2014 study commissioned by UK Prime Minister David Cameron predicted that 300 million people worldwide will have died from such drug-resistant strains by 2050.

Recently, the war on these deadly “super bugs” generated some good news. A team of Northeastern University scientists, working with colleagues at a Cambridge, Mass., pharmaceutical firm, discovered a new antibiotic called teixobactin.

The research so far has demonstrated the antibiotic’s effectiveness against drug-resistant strains of tuberculosis and other infections. Moreover, the team’s natural-environment cultivation methods for growing bacteria are proving to be much more effective than traditional lab-based approaches. 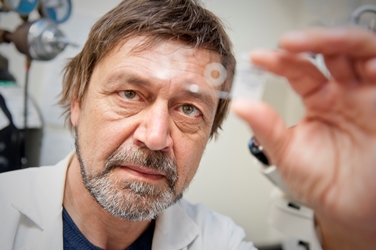 Microbiologist Slava Epstein in his laboratory. Credit: Mary Knox Merrill, Northeastern UniversityIn an interview with Engineering360 contributing editor Larry Maloney, Northeastern Professor and Microbiologist Slava Epstein discusses the challenges in antibiotic discovery and the role of new bacterial growth devices, such as his iChip, in accelerating the discovery process.

Maloney: How serious is the global antibiotic resistance crisis?

Epstein: On a scale of 1 to10, I would put the threat at 8 or 9 and unless we take measures to address this issue, it will soon be at 10. In the U.S. alone, 23,000 people die each year from infections that can’t be treated effectively with antibiotics, and the projections for the future are truly awful, unless we can develop new antibiotics.

Maloney: What do you see as the chief reasons for the rise in so-called “super bugs”.

Epstein: The reasons are purely biological. Antibiotic resistant mutants arise because bacteria can evolve very quickly, which is why we must continually work to outpace these mutants through discovery of new antibiotics. If you take a colony of 10 billion bacteria of any species, which would take up a small fraction of an inch, and inject a large dose of antibiotics, you will see in a day or two a few cells that are already resistant to the antibiotic.

Maloney: Why is it so difficult to discover and develop new antibiotics to combat drug-resistant microorganisms?

Epstein: Traditionally, antibiotics were discovered in soil environments where certain microorganisms produce antibiotics, perhaps as a way of fighting competing bacteria. In the ‘50s and ‘60s, the rate of discovery of new molecules with antimicrobial properties was very high. Scientists thought that there was an inexhaustible source of such chemical entities.

Eventually, however, microbiologists came up against this real problem: Using traditional methods for growing bacteria in the lab, we can cultivate not more than 1% of the microbes that exist on the planet. So, as we got into the ‘60s and 70’s, we began to exhaust the chemical diversity present in that 1%. By the time we got into the ‘80s, it became abundantly clear to many pharmaceutical firms that antibiotic development promised limited return on investment. As a result, much of Big Pharma abandoned antibiotic discovery from natural sources. The last major new antibiotic –daptomycin-- was discovered by Eli Lilly in the late ‘80s.

Some researchers then began pursuing alternatives for antibiotic discovery, such as metagenomics. With that approach, instead of cultivating microorganisms from nature, you extract genetic material from those microorganisms and develop cultures in the lab that express those genes. While metagenomics may one day prove to be successful, it has not as yet demonstrated an ability to produce a stream of new antibiotics.

Maloney: How would you describe your own approach to this challenge?

Epstein: It began more than 15 years ago when I was a purely an academic microbiologist. At that time, I wasn’t even thinking about antibiotic discovery. What I was thinking about was how to gain access to the 99% of microorganisms that could not be cultivated in lab settings.

Working with Kim Lewis, the director of Northeastern University’s Antimicrobial Discovery Center, I began looking at alternatives to growing microorganisms in Petri dishes in the lab. Growing unknown microbes in their natural environment is really a no-brainer, since that environment by definition contains everything the microbes need to grow. The challenge is finding a way to contain the bacteria.

That thinking led to the development of a diffusion chamber, which serves as a cage for growing cells taken from the natural environment, such as a soil sample. The device consists of breathable membranes with pores big enough to let nutrients in and waste out, yet small enough to contain the bacteria. We patented this system, which eventually evolved into the current iChip devices. With the help of funds from National Science Foundation, we demonstrated that the bacterial colony counts thatwe could grow with this system were 300 times higher than with a laboratory agar plate. (Watch a video on teixobactin discovery.)

Maloney: How important was this cultivation device to the discovery of the new teixobactin antibiotic?

Epstein: The diffusion chamber concept significantly multiplies the number of microbial species that we can cultivate. So it is a very valuable tool for NovoBiotic Pharmaceuticals, the Cambridge, Mass., company that Kim Lewis and I founded in 2003 for antibiotics discovery.

In 2010, NovoBiotic received a federal Small Business Innovation Research (SBIR) grant aimed at demonstrating the value of our diffusion chambers. This technology enabled us to cultivate 10,000 novel microorganisms, which NovoBiotic scientists then screened for antimicrobial properties. The most promising of these is teixobactin.

In the meantime, we have also developed many different versions of the iChip. Some versions work better in soil, others in water. One design includes 384 miniature diffusion chambers in a single device for much higher throughput.

NovoBiotic, which is still a small company, is using the iChip exclusively for antibiotic development, but the device could also grow cultured bacteria targeted for applications such as anti-cancer compounds, anti-virals, anti-depressants or anti-inflammatory agents. In the future, NovoBiotic could pursue these new areas itself, or license the technology to other researchers.

Maloney: What do you see as the potential of teixobactin in overcoming resistance?

Epstein: What distinguishes this particular antibiotic from many other antibiotics is that it targets lipids in the cell, rather than proteins. Frequent mutations lead to modifications in target proteins so that they no longer bind to antibiotics, which cause resistance.

In contrast, the probability of resistance arising against an antibiotic that binds to lipids is much lower. That’s very good news in itself, but this particular antibiotic offers other advantages as well. Teixobactin targets two lipids versus only one for vancomycin, a widely used antibiotic that also targets lipids. So the probability of a cell developing resistance to teixobactin is much lower than for vancomycin, and it took about 30 years of clinical use for resistant strains to develop against that antibiotic. No one is saying that resistance will not arise against teixobactin, but it will be infinitely slower than other known antibiotics.

Maloney: What hurdles still remain before teixobactin reaches the market?

Epstein: There’s been a lot of media hype surrounding teixobactin, but much remains to be done before it is a commercial product, this includesanimal studies, modifications by medicinal chemists, clinical trials and much more. Anywhere along the line in this process, even a very promising molecule like teixobactin can fail.

Even so, with iChip, we have now a platform to produce many more promising antibiotics, which increases our chances to reach the commercial market. At the same time, my lab is working on new cultivation technologies that could be better than anything we’ve designed so far.

What also gives me hope is the atmosphere of collaboration that has kept our work moving forward over the last 15 years. That cooperation includes not only our labs at Northeastern, but alsothe work of scientists at NovoBiotic, and our microbiologist colleagues at the University of Bonn.

To be successful in the field of antibiotic discovery, it’s essential to have international collaboration among people from different cultures and disciplines, including business people and investors with a vision. It’s a huge collective effort.

By posting a comment you confirm that you have read and accept our Posting Rules and Terms of Use.
Advertisement
RELATED ARTICLES
Antibiotics are not the only factor in the spread of resistance
Reinvigorated Antibiotics Could Turn Tide Against Superbugs
Ingredient Found in Certain Hand Washes and Toothpastes May Contribute to Antibiotic Resistance
Baker's Yeast is the New Penicillin
Researchers Find Wastewater May Form Troublesome Antibiotics
Advertisement