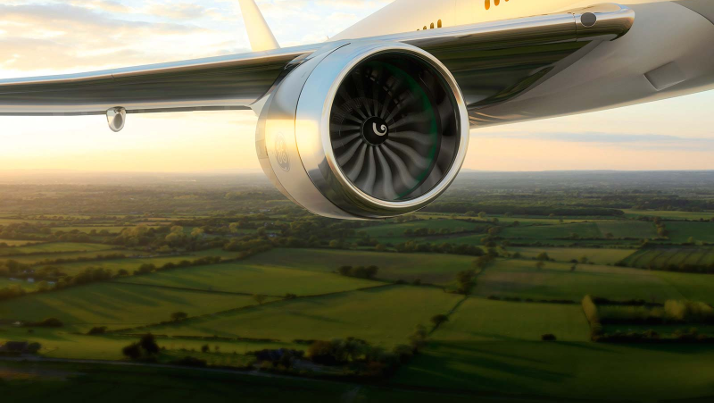 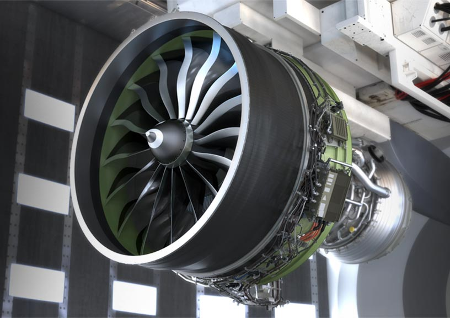 The largest jet engine ever built by General Electric is now undergoing certification tests after six years of maturation testing. With a 134 in. diameter front fan housed in a composite fan case, the GE9X engine will produce over 100,000 pounds of thrust. It will power Boeing’s 777X aircraft, slated to enter service around 2020.

The GE9X is the successor to the GE90-115B powering the Boeing 777-300ER, over which it will have 10 percent improved fuel burn. It will also have 5 percent better specific fuel consumption compared to any twin-aisle engine available. Nearly 700 of the engines have been ordered.

A number of advanced technologies will be employed by the GE9X, including ceramic matrix composites (CMCs). The first commercial engine to feature CMC material in its hot section was the LEAP engine by CFM International. The GE9X engine will make even more extensive use of the material. CMCs will be incorporated in both the combustor and the turbine, allowing hotter operating temperatures and higher compressor efficiency than standard engine components.

CMCs consist of silicon carbide ceramic fibers and a ceramic matrix enhanced with proprietary coatings. CMCs are one-third the density of metal alloys, reducing an engine’s weight. Lower weight results in improved fuel efficiency and durability. CMCs also offer twice the strength of metal alloys, and their heat resistance is superior to that of metal alloys. This allows CMC components to withstand higher temperatures. As a result, less air needs to be diverted from the engine flow path to cool the hot section, improving efficiency.

To meet increasing demand for CMCs, GE established the first U.S. integrated supply chain for the material. Twenty metric tons of CMC raw material will be produced by 2020 in new factories in Huntsville, Alabama, and 25,000 CMC components will be produced annually for the LEAP engine in GE’s CMC component production factory in Asheville, North Carolina. 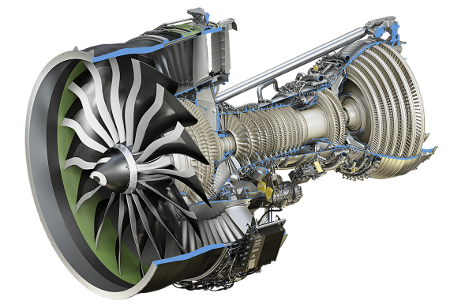 The GE9X engine will have 16 fourth-generation carbon fiber composite fan blades engineered with 3D design software, compared to 22 in the GE90. The blades will be made from stiffer carbon fiber than that in GE90 and GEnx blades, allowing thinner and longer dimensions. The fan blades will feature steel leading edges as opposed to the titanium ones on the GE90 and GEnx blades, enabling thinner blades with the same strength. The trailing edges will be constructed of structural glass fiber composite, which has superior deformation and deflection properties compared to carbon fiber to better handle stresses such as bird strikes on the blades. Reducing the number and thickness of the blades results in a lighter engine that spins faster.

Compared to the GE90’s dual annular combustor, the GE9X features a third-generation, twin-annular pre-swirl (TAPS) combustor for higher efficiency and lower emissions. Its next-generation 11-stage high-pressure compressor will improve pressure ratio from the GE90’s 19:1 to 27:1.

The GE9X will have an approximate 10:1 bypass ratio and 60:1 overall pressure ratio. It will have an 8db margin to Stage 5 noise limits and approximately 30 percent margin to CAEP 8 (Committee on Aviation Environmental Protection) NOx emission limits. This makes it the quietest and lowest NOx emitting engine from GE ever on a per-pounds-of-thrust basis.

GE9X will have its first flight test before the end of the year. The fourth GE9X engine constructed at GE Aviation’s headquarters in Evendale, Ohio, will be flown out of GE’s Mojave Desert facility in Victorville, Calif., on GE’s 747-400 Flying Test Bed. 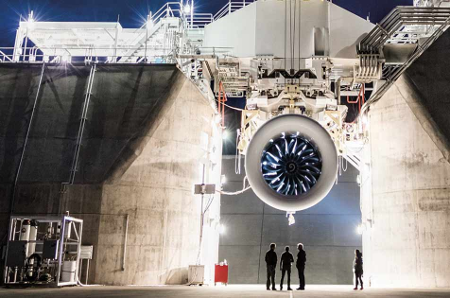 Prior to FETT testing, GE9X CMC components were trialed in September 2015. The assessments fitted GE9X CMC parts in a GEnx engine that powers Boeing’s 747-8 and 787. A second phase of testing was completed in October 2016 that put to work the same components used in the first round, including the same GE9X high-pressure turbine (HPT) stage 1, HPT stage 2 nozzles and combustor liners. It also added CMC HPT stage 1 nozzles. The second phase component tests exposed the engine to harsh environmental conditions of dust and debris, going through 1,800 cycles, equivalent to around 3,000 take-off and landing cycles.

In May 2017, certification tests began at the PTO facility on the second full production-configured GE9X engine.

Re: GE’s New Jet Engine is a Modern Engineering Marvel
#1

Wow, that is state-of-the-art , and impressive in many ways....but what about price comparisons?....sounds expensive....anyway, American industry needs this type of innovation, building a better mousetrap has always been America's bread and butter....Good Luck to GE and the workers that build these wonderful engines and support the economy of these United States...

Re: GE’s New Jet Engine is a Modern Engineering Marvel
#2

Re: GE’s New Jet Engine is a Modern Engineering Marvel
#3