The skies over the Mojave Desert recently hosted the maiden flight of the world’s largest jet engine. The GE9X, 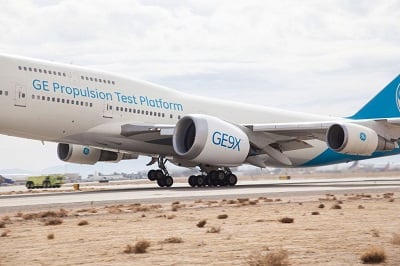 The world’s largest jet engine recently completed its maiden flight over the Mojave Desert. Source: GE Aviationdeveloped by GE Aviation for Boeing’s 777X next-generation wide-body passenger jet, produces up to 100,000 pounds of thrust — several times more than the thrust of many fighter jets.

Engineers designed the fan blades and fan case using advanced carbon fiber composites. This materials selection facilitated weight reductions, cutting the number of blades from 22 to 16 and realizing a fan diameter of 134 in. The engine also features 3D-printed fuel nozzles, parts made from light- and heat-resistant ceramic composites and other new technologies. These advances will translate into a 10 percent fuel efficiency gain relative to the GE90 developed for the current version of the 777 jet.

During the four-hour flight, GE test engineers onboard and on the ground checked essential engine functions, a key requirement for starting a regiment of airborne tests the engine must complete before it can be certified for service. The engine recently completed ground-based icing tests at GE Aviation’s facility in Winnipeg, Manitoba, Canada, and continues crosswind testing at the Peebles Test Operation in Ohio. Engine certification is expected in 2019.

GE Aviation has received orders for more than 700 GE9X engines from airlines including Cathay Pacific, Emirates, Lufthansa, Etihad Airways and Qatar Airways. The GE unit is also developing the backup electrical system for the plane.