How does a jet engine work? Brayton thermodynamic cycle and efficiencies

Part 1 of this series provided a general overview of how jet engines work and the differences in design and operation of the various types of jet engines. Part 2 will examine the fundamental thermodynamic cycle that describes jet engine operation as well as review two measures of jet engine efficiency.

To assist analysis of the thermodynamic processes involved with jet engine operation, engineers typically segment the engine into important sections. These sections are based on the major thermodynamic processes that occur within the engine like compression, combustion and expansion. The sections can be drawn in a simplified engine schematic with each segment labeled with a “station number” to be used as shorthand in documents, graphs and discussions of engine operation.

Jet engine schematic with station numbers 0 through 3 and important parts of the engine labeled.

Throughout the Brayton cycle, through each station of the jet engine, the conditions of the working fluid (air and combustion gases) change.

Referring to the engine schematic image, the Brayton cycle begins at station 0 at free stream conditions.

From station 0 to 1, through the inlet and compressor, air is compressed, raising its temperature and pressure. Ideally, the compression is adiabatic (heat neither enters nor leaves the system) and isentropic (entropy remains constant). In this process, the compressor performs work on the air.

From station 1 to 2, in the combustor, fuel is introduced to the flow and combusted, adding heat to the system and increasing temperature and entropy in an isobaric (constant pressure) process.

From station 2 to 3, through the turbine and nozzle, the gas expands adiabatically and isentropically. During this process, the gas does work on the turbine, which is transferred by the shaft to the compressor. It also does work in the nozzle, accelerating out of the engine to produce thrust.

From station 3 to 0, after exiting the jet engine, the flow returns to free stream conditions, cooling down in a constant pressure process.

The diagrams above illustrate an ideal system. In reality, jet engines do not operate ideally. This means that the processes described above as isentropic or isobaric are not actually perfectly constant in entropy or pressure, resulting in slanted lines instead of vertical or horizontal lines. The ideal Brayton cycle is close enough, however, to act as a useful model for analyzing jet engine operation.

Overall jet engine efficiency can be described as the ratio of propulsive power to fuel power, or equivalently as the ratio of the power delivered to the vehicle to the total energy released per second through combustion:

where T is thrust, U0 is flight velocity, ṁf is fuel mass flow rate and hf is the specific fuel enthalpy (fuel energy per unit mass). Overall engine efficiency can be split into two components: thermal efficiency and propulsive efficiency. The overall efficiency is then a product of these two factors:

An engine’s thermal, or internal, efficiency describes the efficiency with which it converts the energy contained in fuel into kinetic energy. It can be written as the ratio of the rate of production of kinetic energy to the fuel power:

Alternatively, thermal efficiency can be expressed for an ideal Brayton cycle as the function of the ratio of temperatures across the compressor:

As air is compressed in the compressor, its pressure and temperature rise. Jet engines that operate with higher pressure ratios and temperatures have higher thermal efficiency. This is limited by materials that can withstand very high stresses and temperatures without melting or otherwise mechanically failing. 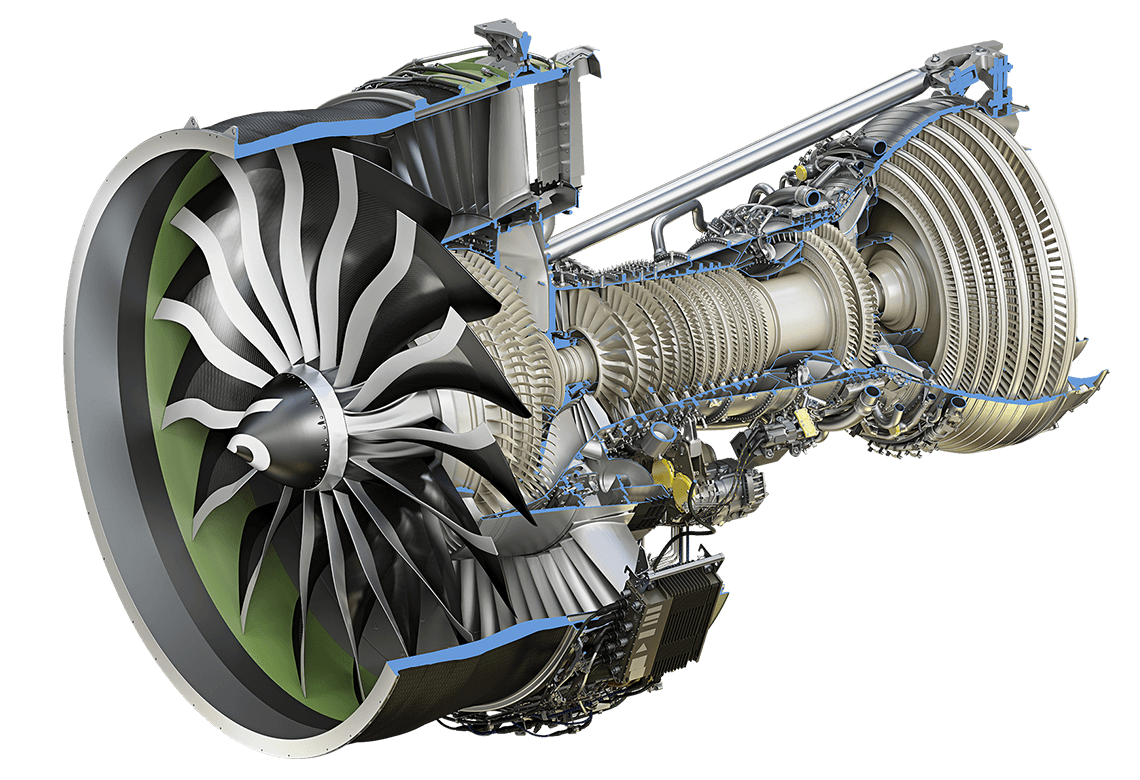 GE9X turbofan engine. Source: GEIn modern jet engines made by Rolls-Royce, temperatures in the combustor can reach about 2,300° C — nearly half the temperature of the sun’s surface. Even using special high-temperature-resistant nickel alloys coated with thin layers of ceramic, the combustion chamber structure would melt if cooler air from the compressor was not directed through a network of laser-drilled holes to cool it. Meanwhile, GE’s new GE9X jet engine delivers a pressure ratio of 60:1, meaning the pressure of air exiting the engine’s compressor is 60 times higher than the pressure of air entering it.

The other efficiency figure that is important when evaluating jet engines is propulsive, or external, efficiency. This number describes how efficiently the engine converts kinetic energy to propulsive work. Engines with propelling mechanisms that waste very little energy in this process have high propulsive efficiencies.

Propulsive efficiency can also be written in a simplified form as a function of the ratio of exhaust velocity and flight velocity: 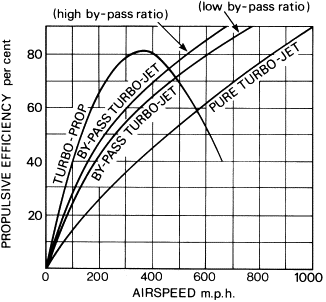 Propulsive efficiencies of various jet engines plotted versus aircraft speed. Source: Rolls-RoycePropulsive efficiency is affected by the speed with which the aircraft travels. At low speeds, a turbojet is not very efficient, since a lot of energy is wasted as the high-velocity jet exhaust enters the relatively low velocity airstream. At low speeds, it is more efficient to use the work produced by a jet engine to drive a propeller, a configuration known as a turboprop. After about 400 mph, this advantage drops off as the blade tips approach supersonic speeds, creating shock waves that reduce efficiency. At high airspeeds, turbojets outpace turboprops in propulsive efficiency. 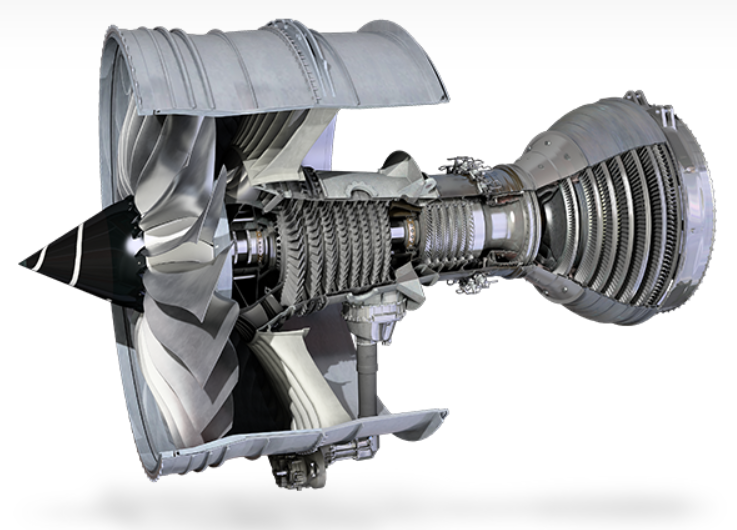 Trent 1000 turbofan engine. Source: Rolls-RoyceBoth turbofans and turboprops have high bypass ratios, pushing much more air around the engine core than through it. A Rolls-Royce Trent 1000 turbofan, one of the engines that powers the Boeing 787 Dreamliner, has a bypass ratio of 10:1, moving 10 kg of air through the bypass duct for every 1 kg that travels through the engine core. These high bypass ratios increase propulsive efficiency and reduce thrust specific fuel consumption (TSFC), the amount of fuel consumed per unit of thrust. It is more efficient to accelerate a large mass of air a small amount than it is to accelerate a small mass of air a large amount. In addition, turbofans operate more efficiently than propeller-type engines at higher speeds due to a high fan blade count and enclosed fan.

By posting a comment you confirm that you have read and accept our Posting Rules and Terms of Use.
Advertisement
RELATED ARTICLES
How does a jet engine work?
3D-Printed Jet Engine Revved Up to 33,000rpm
Pratt & Whitney Completes Tests on Novel Fighter Engine
Combined-Cycle Power Plants: Is Their Reign Assured?
SABRE: A Hypersonic Precooled Hybrid Air-breathing Rocket Engine
Advertisement