Today's military munitions are more powerful and precise than ever before. By providing weaponry guidance systems, collateral damage can be greatly reduced. Highly sophisticated smart bombs can hit specific targets within mere yards.

Similar to traditional bombs, smart bombs fall to the target by the force of gravity; however, their fins have 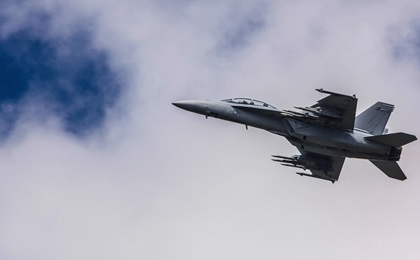 Fighter jet. Credit: CC0 Creative Commons control surfaces that move in response to remote guidance commands. Therefore, the angle of the bomb’s descent or the direction of its fall can be adjusted. The bomb glides, instead of falls, to its target. Smart bombs use GPS for guidance—the same type of system that drivers use on road trips. In addition to increased precision, smart bombs can be as much as 20 times cheaper to build than smart missiles, which use jet engines to propel themselves.

Mohawk Spring produces components for smart bombs. The supplier works with the military to create a custom spring that has a very tight tolerance and stringent heat treating certifications. Today, Mohawk Spring works in the design phase to ensure that exact specifications are met. But this wasn't always the case.

In the past, the military had been purchasing springs from Mohawk Spring for use in smart bombs, and then was working with another contractor to perform subassembly work on the component. The end result was not meeting the tight tolerance requirement, and the springs were not operating correctly. The product hand-off was creating a quality issue, in addition to sucking up precious time. Mohawk Spring knew the springs worked properly when they left the manufacturing facility, so they sent their engineers to investigate. They did not expect to see what they found: an additional step built into the manufacturing process that Mohawk was not a part of – a step that was greatly affecting the quality of the resulting product.

Mohawk took note and told the customer it could help save time, money and even reduce the weight of the part if it could re-engineer the spring so it would meet the really tight tolerance requirement. Now, the spring has been redesigned and by eliminating the extra step in the process, the customer receives a quality part directly from the manufacturer that meets very exact specifications.

This is yet another example showcasing how valuable Mohawk’s design engineering team can be when they are engaged early in the process. Through early involvement, Mohawk can help customers save money and use their time more efficiently. In addition, because communication is more direct, quality often improves as well, resulting in an arrangement that’s as efficient as a smart bomb itself.

By posting a comment you confirm that you have read and accept our Posting Rules and Terms of Use.
Advertisement
RELATED ARTICLES
Spring Tolerances: An Often Overlooked Design Consideration
Mohawk Spring Proves Design Expertise Leads to Reduced Costs
One Spring or Ten Million...
AI algorithm finds unexploded bombs in Cambodia
Study reveals "bug bombs" do not kill roaches
Advertisement